This deck list was submitted by community member RaberSaber.

Land Say Go has been actively requesting community submissions for the Standard format. We do not want to exclude other formats, but we are focused for the time being on trying to test the meta and push the envelope for the most recent sets of Magic: The Gathering.

This deck anchors itself on the new mechanic of Surveil, and represents in the submitted 60 cards a fairly consistent draw package. What the deck lacks in substantial finishing power, it makes up with a low curve, multiple threats, and a variety of tools in the box to create board-lock long enough for us to get to the combo pay off.

As we go about reviewing these deck list submissions with you, we will also be making recommendations and submitting our own version of the list. The goal being to foster community conversations regarding the best possible way to represent or exploit a combo, to push ourselves to greater levels of understanding and clarity in the Standard format, and to impact the game of Magic by taking our creations to LGS's, tournaments, and kitchen tables all over the world. 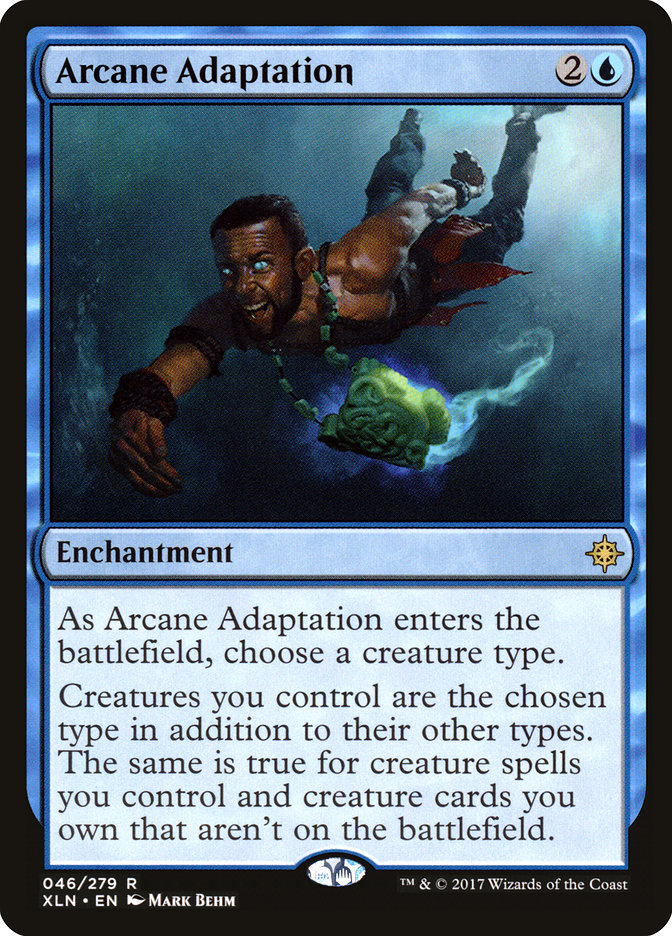 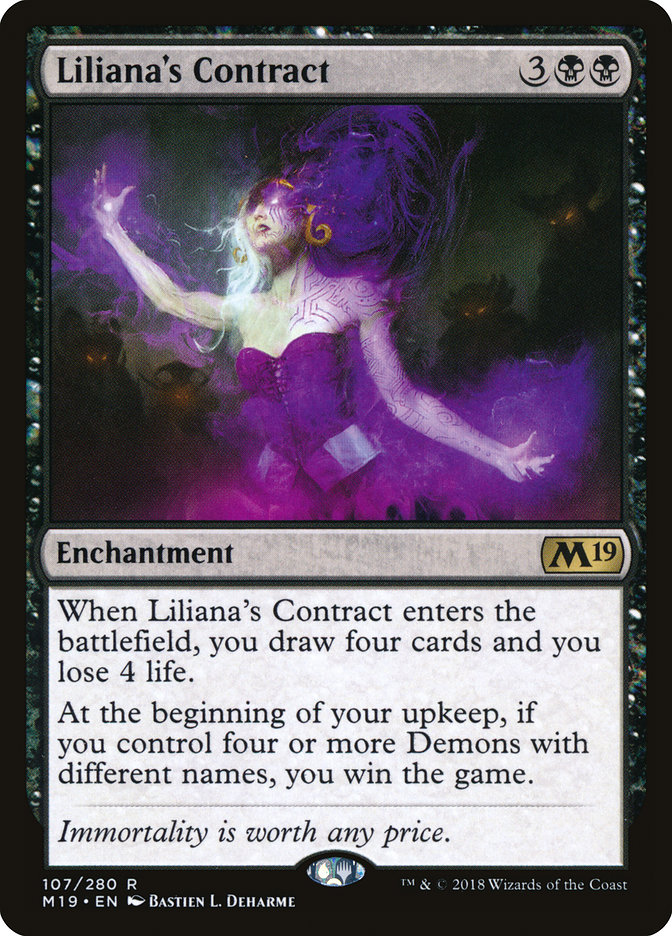 We have the mana base right now to support this venture, and we have a fresh new mechanic with surveil that should supplement our filtering to the point where we can stick an Adaptation and a Contract at some point in the game. Arcane Adaptation changes all of our creatures, present on the battlefield, in your hand, or in your library to a specific creature type. Demons. The combo allows us to play into Liliana's Contract, draw some cards to stoke the fire, and place an win-condition on the board.

It's surprisingly effective - this combo. The only drawback I am considerably worried about is not being able to recoup the loss of life reliably. Given so many decks are racing our life total in the meta, we may find ourselves in a defensive posture and losing precious creature presence on the board to protect our life total.

Lazav, the Multifarious is an interesting Legend. We had a 3/3 Hexproof version of him at converted mana cost 4, that exploited creature cards entering the opponent's graveyard. His core ability remains similar, but now we are exploiting our graveyard, which requires that we often place a great deal of weight on the surveil mechanic to give us viable and useful targets for cloning. Lazav would be much better if he possessed one more point of toughness, deathtouch, or even lifelink. I understand why the design team decided not to give him hexproof this time around, but he would have benefited from something more - a little je ne sais quoi...

It's problematic that when we are trying to combo into Arcane Adaptation and Liliana's Contract that we find ourselves handcuffed by Lazav keeping his name upon cloning a creature in your graveyard. His utility is better served as a back up copy of a finisher, and this deck (as submitted) could use some finishers.

During Odyssey block, waaaay back in the day, Shadowmage Infiltrator was a force to be reckoned with. It had Fear, before Fear was Fear, and acted as crazy tempo for decks looking to control the hand or board while dealing nominal amounts of damage. Darkblade Agent harkens back to the Infiltrator in giving us an additional point of power, but also embodies a deathtouch threat that adds tempo to us being able to find the combo when unblocked. We have options in this deck that give us the ability to surveil on our opponent's turn giving this creature deathtouch and block away a Nullhide Ferox or Vinemare and survive. When it comes to Deathtouch or Fear - I choose Deathtouch.

Do you like chump blockers? Me too. Narcomoeba saves us two mana. This Illusion also flies. It plays well into our game plan, by allowing us to pitch it to the graveyard (battlefield) during our voluminous surveilling, and expedites our combo by giving us another creature name to fulfill the win condition on Liliana's Contract. Nightveil Sprite is a great utility card, a flyer with two toughness is much better than a flyer with one toughness, and upon turning it sideways we work further through our deck in seeking out the cards we need to win. Whisper Agent is a little bit lackluster, but in this list of 60 he represents a cantrip package, we can flash him in to add additional damage for trades during blocking in combat, or the Agent can also be flashed in at end of turn to add more threats to the board or fulfill our Contract. He also kicks off surveil. Barrier of Bones is a wall - a skeleton wall - a demon skeleton wall when things are going well - it surveils and stifles early aggro. If we get lucky it draws a bolt, but more importantly it is a one mana named creature that ties into our win condition.

I love this bug.

Every new game mechanic added to #MTG brings with it a couple of cards that have the potential to impact the meta in meaningful ways. Dimir Spybug is that card for the surveil mechanic - the only card that does it better is Doom Whisperer. This deck list piles on the surveil triggers, a turn two menace flyer that gathers power and toughness on said triggers is just the kind of removal magnet or life total clock we need to be putting in front of our opponent. Menace is still a very potent creature ability; when the Spybug gets out of reach of equitable trades, and your opponent runs out of flyers to block it, you can find a wincon solely in this card. This is a card I would run 3-4 copies of in a list so heavily tied to surveil.

To round out our creature options in the submitted list we have another common and another uncommon that serve a couple of purposes, but these are slots in the deck that might be better served by more impact producing options.

House Guildmage belongs in a Dimir themed deck, and on the surface I don't have a problem with this card, but from a competitive standpoint any permanent that ties up mana resources and doesn't set off a combo, or provide a strategy to our deck automatically gets bumped down a tier in usability and consideration. Creating stagnation for our opponents creature plans is always a good thing, but the Guildmages are clunky, and really better suited for drafting or limited environments. Hired Poisoner is a great one drop with deathtouch. He is the right kind of defense for a deck like this that might be worried about getting overrun by a more formidable creature strategy. The Hired Poisoner also plays into our strategy of multiple demon creature names for the Contract win condition, but...he just feels so bad to top-deck in a midrange game.

Cast Down is this Standard blocks Doom Blade. We experience a painful caveat at times with not being being able to target a Lyra, an Aurelia, a Marwyn, a Sai with it, but for the most part it serves the function it is intended for - remove threats and set your opponent back. Dazzling Lights is a really nice piece of tech in this list; we get instant speed surveil and shrink a dude. When we combine Dazzling Lights with Darkblade Agent we get a "hidden gotcha" in the form of drawing a card for no blocks, or outright killing a blocker assigned to stop the combat damage. Good tech is good. Opt is helps us filter - preferably on your opponents end step (wink).

This community submission did not include a sideboard, and as part of my community submission reviews I felt it would be prudent if I made some suggestions or tweaked the submitted deck to reflect a comprehensive 75 cards that I would play in chasing the core combo or meta-killer list.

I really like a number of the surveil mechanics that RaberSaber (Robert) built into his list, so I was faithful in trying to preserve the decided fundamentals. I also wanted to ensure we were not leaving ourselves undervalued on board, and decided to pack in a little more punch and some opportunities for mid-game resilience. Doom Whisperer is full on Beast Mode. He is cheap for a 6/6 Flyer, but his at whim surveil ability for a paltry 2 life can find us critical answers when we most need them. I wanted to jam in Arguel's Blood Fast, because a flipped Temple of Aclazotz can see to it that we are gaining back essential life points lost to Liliana's Contract. Our life total and surveil capabilities are also buffed by Whispering Snitch. I opted out on Opt, and went with a hard-counter, Sinister Sabotage, to represent more control and further enhance our Dimir Spybugs.

The sideboard is a hodge-podge of value cards, that drastically improve chances post-sideboard, and give us further resiliency. Discovery/Dispersal generates tempo and surveil triggers, but also moves us ahead when we are racing an opponent in top deck mode. Vraska's Contempt is best used in this Standard meta against Vraska herself (Teferi too). Negate, because sometimes it's best to "LandSayNo." An additional Demon for posterity. Disinformation Campaign for hand destruction and time-gating your opponent, and Murder. I also bumped the lands to a count of 23.

This list is fun - that is what we are all about - fun. A big LandSayGo shout out goes out to RaberSaber for being one of our first two community submission reviews on LSG. The second of these community reviews will be available on Friday! Until next time, play a Land, a Barrier of Bones, and Say Go.

If you would like us to review your brews, head over to our deck techs page or at the bottom of every Land Say Go page for an opportunity to send in your list as well.