Bird is the Word - Standard

This decklist was submitted by TheGuyWhoNeverGoes4o.

Land Say Go is fortunate enough to have experienced a good response from the community on our Standard meta adventures. Today, we have an extremely fun and unique deck list to explore and play!

There's really no way around having to say this: this deck is cool! We often find ourselves caught in a dilemma here at LandSayGo; do we focus on deck lists that go 5-0 in online Competitive leagues, or focus on the ingenuity that Magic players continually exhibit when seeking new and interesting ways to interact with the meta? I would posit that, at LandSayGo, we are trying to identify decks that can do both.

So, my hat goes off to you TheGuyWhoNeverGoes4o; I feel like you've brought a deck list to light here that can (and does) win games, and one that is also unique & fun to play. Thank you.

This deck leverages strategies that we find in several of this last year's blue tempo decks, but does something new and fresh at the same time. I intentionally field-tested this deck list (with no sideboarding) in 20 matches and won 14 of them. I am going to discuss the synergies and contents of the original deck list, and provide you with a version we crafted that was also field-tested resulting in a highly successful record.

If you want to play this deck well, you should consider keeping an opening 7 card hand with three lands. We want to reliably cast Murmuring Mystic on turn 4, keeping in mind that sometimes we want to cast Mystic on 5 with access to Dive Down or Siren Stormtamer for pesky removal match-ups. Here is the core combo:

Murmuring Mystic and Quasiduplicate. Murmuring Mystic is a new blue wizard creature from Guilds of Ravnica that generates 1/1 flying bird illusion tokens upon the casting of an instant or sorcery spell. With Quasiduplicate, a dollar rare right now, but worth every bit of $40,000.00 in this list, we get a sorcery speed copy of our Murmuring Mystic, and a trigger. Even better, Quasiduplicate has Jump-start, which allows us to go recursive with copying the mystic and triggers while further expanding upon our token generation efforts, beyond this most of our spells are at instant speed. If you've ever seen Jessica Tandy's screaming panic in Hitchcock's The Birds, then you know the look to expect from your opponents as your board presence quickly gets out of reach from everything but a board wipe. Siren is in the deck to run interference, and turn on our Wizard's Retort.

Far cry from a "past time in the park" we have some cheap enchantments to help with life-total maintenance, and putting additional pressure on our opponents. Make no mistake, the goal is to overwhelm our opponents, and do it in a passive way in terms of the instant speed interaction we have access to. By buffing ourselves and our tokens with enchantments we are giving our combo a chance to be multiplicative in the benefits it is providing us during game play.

This deck list only runs 7 creatures; I have no idea if its author runs additional creature cards in their sideboard, but you will notice as we get further into discussions that my modifications to the combo see to it that we are running a few more. Sometimes, you find yourself searching for a combo piece and not finding it, and with so much dependent on Murmuring Mystic for this deck to "do its thing," it might be important to devote more slots to ensuring we take flight (bird pun). Ajani's Welcome is effective when we have resolved a Mystic and are making bird tokens, given the right top-deck draws, this could be very powerful with multiple copies in play. Favorable Winds speeds up the clock on our opponent by providing our tokens with additional power and toughness, and can gradually make our birds flocking huge. Search for Azcanta just will not go away; there really isn't a replacement for it in the current Standard meta. An upkeep surveil trigger is incredibly useful, and a flipped Sunken Ruin gives us valuable sorting tech to find key pieces.

Remember, we generate tokens upon casting Instant and Sorcery cards. Let's start with the draw package: 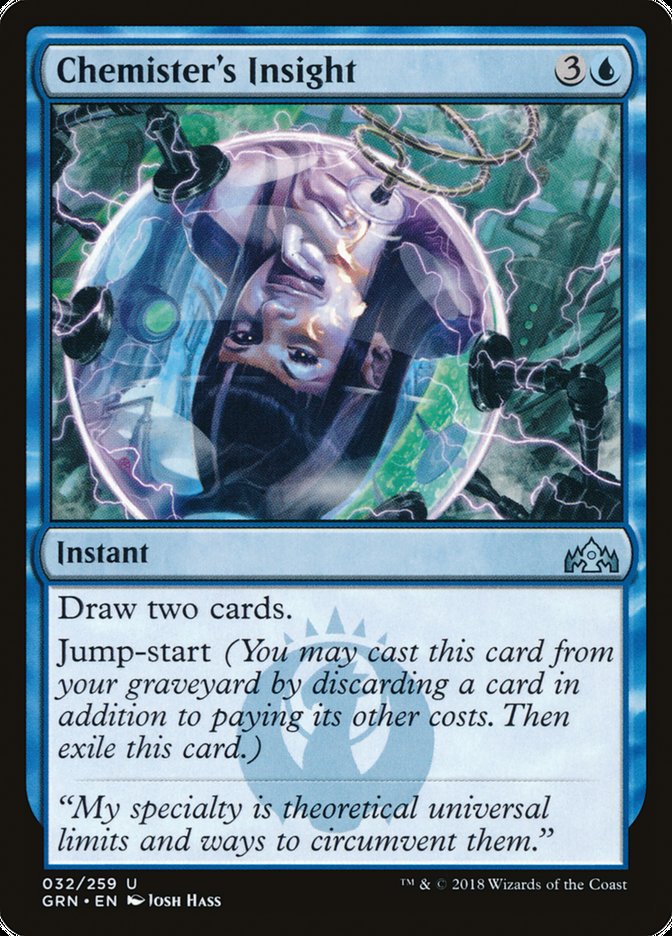 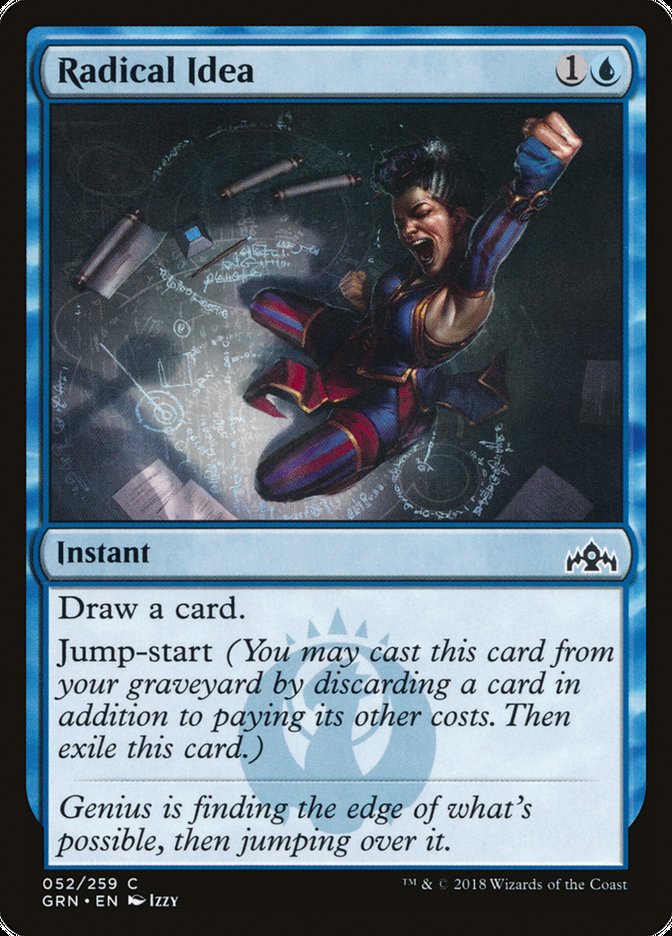 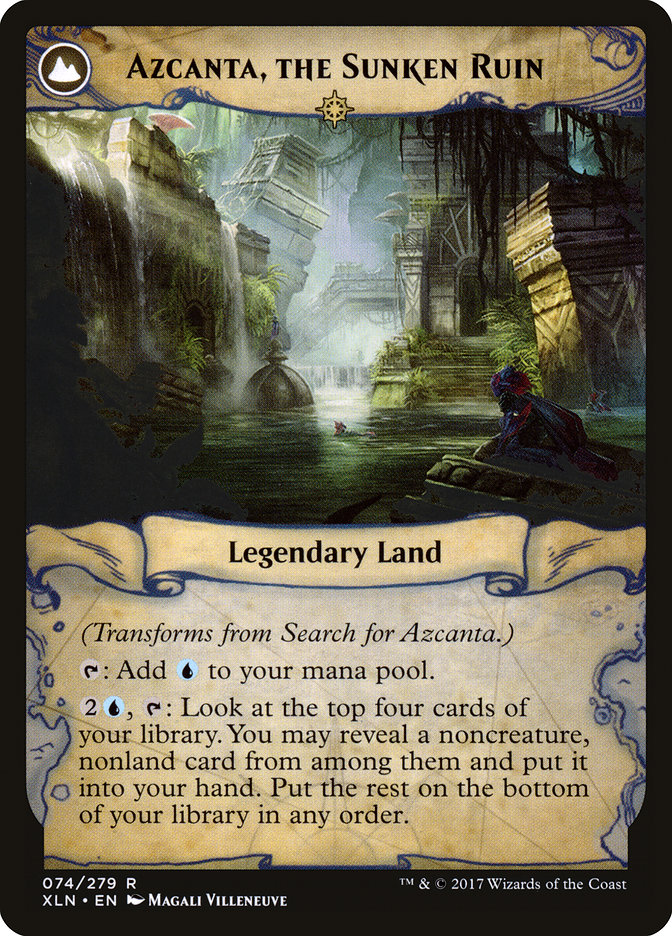 Chemister's Insight is an instant speed draw two. A recently rotated Glimmer of Genius may have been better at a stand-alone glance, or if you are taking into account that we had Torrential Gearhulk to really blow the power of that card, and its built-in Scry 2, out of the water. Jump-start is crazy good in this deck, we are getting double benefit of the draw two mechanic by pitching an unneeded land, and double the benefit of the token generation off of the Murmuring Mystic. Opt is a great cantrip at instant speed - filtering, draw, and a token or two (or three) in a pinch. Radical Idea is pretty, well, radical in that we get recursive draw and instant speed cantrip capabilities in another card. Then of course - good old Azcanta the Sunken Ruin - searching for pieces and spells on your opponents end-step is always a good idea.

Drawing cards, especially at instant speed is exactly what we want to be doing, but sometimes we have to do things we don't want to do, like put a Murmuring Mystic in the graveyard who was not adequately protected. We have to protect our combo. Everything else is secondary.

Dive Down is another instant speed rebuke to our opponent's spells attempting to remove our core combo piece. Blossoming Defense was incredible in green before rotation, and frankly, this type of spell is not surprising when it comes to blue, but Dive Down creates some great interactions with the Mystics. We can give it hexproof, effectively a one mana counterspell, or save it from damage, or stifle a big attack by buffing toughness, and then we get tokens - talk about utility. Slaughter the Strong is such a big slap in the face for aggro decks, especially because we are on turn 4 when dropping our Mystic - which means we need to survive to turn 5 to combo off. When we are getting outpaced, which happens with this deck, we need to remain calm and Slaughter the Strong.

Take Heart is some spicy tech in this deck. It's a one drop Instant, it gives us a favorable exchange during combat, gives a mini-Congregate style effect, and generates tokens during our combat step when our Mystic is online. Wizard's Retort is a solid Standard 3 mana counterspell, but becomes an easy two blue when we have a Mystic or a Siren in play - did I mention instant spells generate tokens? "Counter target spell, then create two 1/1 Bird Illusion creature tokens with flying." For UU? Pretty sweet.

The original submission is in no way devalued by us taking a crack at our own list. In fact, the old adage applies here: "Imitation is the best form of flattery."

I decided to take a blue shell approach to this combo. In some of my test matches with the submitted list I experienced some mana inconsistencies that will be smoothed out nicely by the addition of Hallowed Fountain to the meta. There are UR variants of Murmuring Mystic decks floating around that leverage the Steam Vents/Sulfur Falls mana platform to do a lot of what we are trying to do regarding token generation, but do not use Quasiduplicate, as it is perceived as too slow to be truly competitive. I also dropped Favorable Winds, deciding on more spells and generating more tokens for the win-con. I elected to go mono-blue in an effort to simplify the mana base, keep our hand full of instants, and give us a sideboard plan that can contend with any deck in the meta. There are few decks more effectively when piloted correctly than mono-blue counterspells.

A 3 mana flyer with 4 toughness, and a power stat that grows for each Island we play is decent enough. Against decks with creatures on the ground, its mere presence demands removal, or the life total clock tends to tick down rather quickly. The Djinn is also an outstanding target for our Quasiduplicate; I have won several games off of the perceived threat of multiple ever-growing flyers. The addition of Tempest Djinn becomes an oppressive distraction for our opponent. We have a lot of draw potential in this deck, Chemister's Insight, Radical Idea, and Anticipate all find us more threats while triggering the Murmuring Mystic. With so much draw we are sure to see several of our 24 Islands, and the Djinn puts those lands to use in additional ways.

Coming Up With Options...

15 Instant and sorcery spells, 10 of them counterspells. Our goal in creating a sideboard for the mono-blue variant of Bird is the Word is to slow down the game for our opponent long enough for us to resolve our Mystic if necessary. Once a Murmuring Mystic is resolved, we only further benefit from going one-for-one in countering our opponents spells.

Creating additional drag co-efficient wins games for blue mages. Having a mediocre-to-good understanding of our opponents win conditions helps us win our battles, pre-sideboard we want to be able to stick a well-timed counterspell and get ahead. When we find ourselves behind in game 1 and unable to stabilize, we want to be able to sideboard in options that elongate the game for us to facilitate pulling ahead over time through our combo.

When we are not needing to protect our core combo from removal, which is rarely the case, we want to add additional acceleration to our deck, drop the Dive Down and add Opt. River's Rebuke is an alpha strike. If your opponent is playing a deck that goes wider than you, which is rarely the case, sideboard in the Rebuke and teach them how it's done.

Well (Now), Everybody Knows That The Bird is a Word...

I want to again thank the community for keeping your brews rolling in so we can keep the articles rolling out. The original submission by TheGuyWhoNeverGoes4o is an amazing list, works very well, and would I recommend taking it for a spin at a #FNM near you.

Until next time, Land, Say Go.