This is a highly competitive deck.

Dinosaurs went extinct approximately 66 million years ago on the planet Earth. Luckily, they are alive and well on the Magic plane of Ixalan, and no several-kilometer wide asteroids are expected for the time being. Naya Dinosaurs were definitely "a thing" when Ixalan and Rivals of Ixalan first hit the scene, but as we rolled into Dominaria and M19 they kind of lost some steam.

I've been looking for a way to make Dinos competitive again, and I think this 4-Color list takes us straight back to the Jurassic era - when Carnage Tyrants ruled the land! A time when Ripjaw Raptors moved in packs, and drew you extra cards!

This deck list showcases an excellent utility package in the sideboard that speaks to a number of the current meta problems we face when trying to turn on our deck on turn 5 or 6. Pro Tour Guild of Ravnica is in the books (Congratulations to Andrew Elenbogen) and the Top 8 Decks in that Pro Tour event were outside of what I think everyone was expecting to see. White-Red Weenie decks took 6 of the 8 slots, with Izzet Drakes taking the other two.

From a spectators standpoint it was boring as hell.

From Land Say Go's standpoint: it's time to ensure that white weenies don't dominate the competitive meta going forward. The meta always rolls and shifts to acclimate for a single decks dominance, and I believe the current standard pool has enough answers that this single "deck-wreck" at a tourney shouldn't happen.

Big hungry lizards. 4-Color dinosaurs is what we have here out of the gate. We are trying to ramp into our big dudes quickly and outpace our opponents board state. There were several Naya dinosaur lists that made competitive waves when #IXL and #RIX first made their way into the Standard set pool. Ripjaw Raptor has yet to really shine in Standard; it was a limited bomb to be sure, and being a 4/5 for 4 mana is still pretty good, but Ripjaw is not as favorable in the 4 slot for green decks as Vine Mare or Nullhide Ferox. However, in our deck, which is straight outta Isla Sorna, Ripjaw becomes and incredibly valuable creature. No one ever wants to chump a Ripjaw Raptor - it's surprising how often damage gets through.

We are running 4 copies of Thrashing Brontodon in our main 60 cards. Like most dinosaurs we get great value and toughness for our mana investment; a 3/4 for 3 mana, and it has added benefits of being able to nuke an Immortal Sun, Conclave Tribunal, or Search for Azcanta from orbit. Regisaur Alpha is another card that needs mentioning here - we get a hasty token on the enter the battlefield trigger, but then on turn 6 (or sooner) Carnage Tyrant swings the turn it comes into play. When the stars align on our creature curve great things happen with this deck - we don't want it to be clunky, so we've added some additional creatures and spells to help smooth things out.

Every green deck worth its weight in dinosaur dung (the DNA is valuable) runs Llanowar Elves and Drover of the Mighty. We have to have mana nerds to compete with faster decks, especially when our strategy is to get out of the gate faster and remove any opportunity our opponent has of recovering from combat. Drover taps for a mana of any color, further helping us smooth any mana inconsistencies, and becomes a 3/3 when we control a dinosaur - as much as any 9 ton carnivore can be controlled, I suppose. Running eight mana-nerds feels about right here, but you can play with the numbers and let us know what you think.

Commune with Dinosaurs is a sweet tutor, especially in a Dinosaur deck (imagine that!). We get to dig deep - 5 deep - and pluck a dino or land and pop it into our hand. It doesn't feel good when we wiff or see critical removal get shipped to the bottom but it keeps our aggro going, and sees to it that we are able to maintain our curve. Thunderherd Migration is an early game Rampant Growth that is meant to get us there when we need to be.

Previous iterations of the dinosaurs in competitive Standard were running Lightning Strikes as the major removal component. What we were missing before was some removal with a smack. Deafening Clarion gives that good old Sweltering Suns feel, with the added benefit of lifelink for our dinosaurs during a combat phase. I would expect Deafening Clarion to make a noticeable appearance in competitive Magic, what with the Pro Tour pigeon-holing everyone into RW, W, B, and GB archetypes - each with creature bases that may not reliable survive the wipe. What we need is creatures that can get to board, are bigger, and survive a 3 damage wipe. 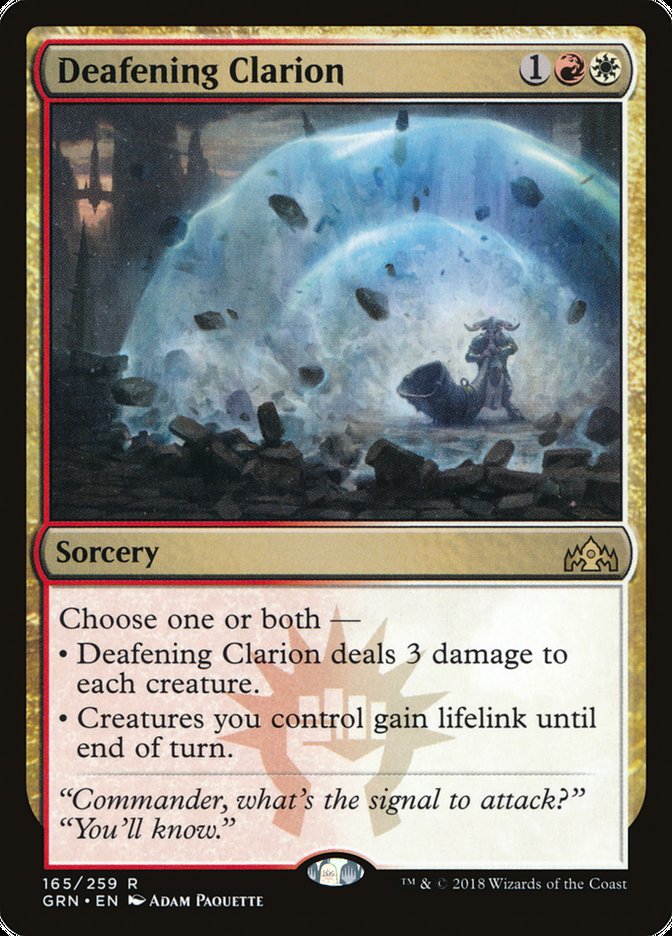 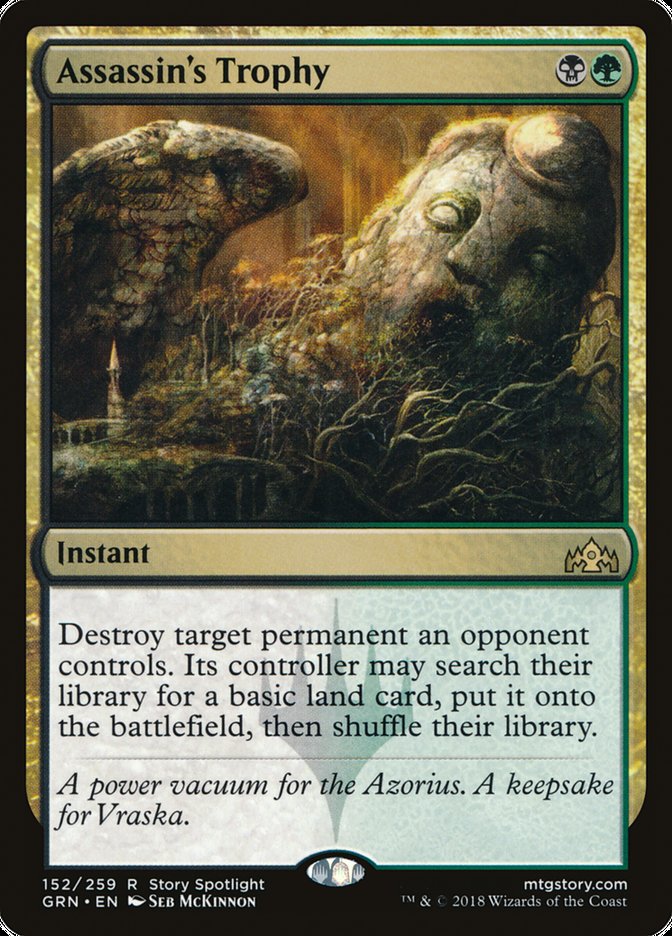 Assassin's Trophy has been seeing less and less play. Mainly due to the ramp it provides to your opponent. An untapped land available to your opponent on your turn is no small price to pay for removing a non-land permanent. I think this disdain is quickly overlooked when we realize that in a deck like 4-Color dinosaurs we have to have some type of "answer" that positions us for a win. We don't want to be swinging at an unchecked Teferi or Karn when our aggro game plan is to pressure the life total. We want our opponent to burn their open mana on preventing us from Trophying their permanent, not casting Settle the Wreckage. 3 copies of Assassin's Trophy in the main 60 here.

When your main deck is capable of winning game one, then it is likely capable of winning game two. When you have an understanding of your opponent's archetype and deck structure, you have an advantage that should be exploited. There really isn't much that can catch us off guard with this deck as the meta becomes more and more rigid. Not many decks can take the meta by storm at this point. Ingenuity is replaced by strategy, repetition, and practice. We have included some solutions in this sideboard that help us break free of our cages and run rampant.

Find // Finality is a great card. I love dual-sided cards, and advocate decks comprise of 30 or more of them if possible. We get a one off utility to slot here that can help us bounce back from a wipe, and acts as a nail in the coffin for an opponent whose board presence can't survive a Finality (Languish) style effect. 3 copies of Duress to stave off counterspell and removal heavy decks. Settle the Wreckage to add a total blowout effect to our matches where our opponents are getting off to combat phases faster or more reliably than we can. Settle the Wreckage, followed by big dino after big dino, is a no-win situation for our opponent in most cases.

I'm a big fan of Angrath, the Flame-Chained. He adds disruption to our opponents hand, and pressures the life total. His second ability gives us a chance to use our opponents creatures against them, and acts as removal for anything with converted mana cost three or less -he just creates alpha strike scenarios. Zacama is a big nasty creature, with no downside except that he doesn't have haste - luckily our Regisaur Alpha has his back. Vivien Reid is the color green in terms of this Standard meta - she smacks down flyers (a potential problem for our deck) and acts as Naturalize on a stick. More importantly she gives us additional card draw, and her emblem just ends games. I've said it before and I'll say it again: if you lose with a Vivien Emblem in play, shame on you.

Sometimes we need more than just our sweepers to contend with a meta full of 1/1 flyers. So we've included a couple of copies of Atzocan Archer for just those instances. We also want to be able to shut down blue tempo strategies that drop a Curious Obsession on their Siren Stormtamer. Deathgorge Scavenger loves shutting down Undergrowth mechanics, and takes care of those pesky Arclight Phoenixes when they aren't in-and-out of the graveyard on the same turn. One copy of Lava Coil makes it into sideboard for oomph factor.

Again, this deck is very competitive. It can and does win games regularly. My one recommendation is to let your creatures do their work, hold some of your resources back to bounce back in the face of board wipes. Be strategic about your curve - any three land hand with a drover and an elf is a keeper. We don't mind drawing into the bigger creature spells, as we are looking for a consistent mana base first. Have fun.