Well, MagicFest KC came and went, and the overall winner of the event was Esper Control. This wasn't much of a surprise, its a solid deck. But with that, I just want to preface that this deck is not Esper Control, even if it is in Esper and does play similarly to control. That said, this deck is actually a combo deck.

So what's our combo? 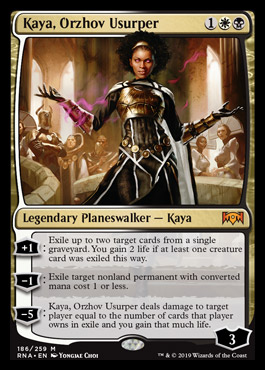 Well, our main win condition is actually with Kaya, Orzhov Usurper. Basically, we want to tick Kaya up, -5 and nuke your opponent with an instant kill win. So, how do we make this happen? Well, we need to be able to consistently send our opponent's cards to exile. Luckily, #MTGWAR gave us the perfect card for just that. Ashiok, Dream Render is another 3 mana planeswalker that exiles your opponent's graveyards on a -1 activation, this also results in a mill 4. Often times, our opponent's won't see the looming threat of Ashiok's activation. And I've got to tell you, after playing her, and seeing it played against me at MagicFest, Ashiok does a lot. It really messes up your opponent's deck synergies and adds a good bit of disruption. It can help keep your mana starved opponent's off lands. It can permanently remove your opponent's God-Eternals after you kill them. It also prevents our opponent from tutoring up things in their deck, including activations of Growth-Chamber Guardian. But the most important thing about Ashiok is that not only does it setup an instant 20 (or more) loss of life with Kaya, but can also be a win condition all on their own. When running 4 of them, you'll see them often, not to mention you'll have ways in this list to return walkers from the graveyard to the battlefield, which we'll touch on later. But by exiling at least 4 cards a turn, every fifth turn is 20 cards exiled. And if you opponent is drawing any cards what-so-ever, you can quickly cause your opponent's resources to dwindle.

While we are talking about planeswalkers, lets also touch on the 2 Baby Teferi (Time Raveler). As I mentioned before, we'll be running some similar strategies as what Esper Control may have. Teferi, Time Raveler fits that bill to a T. He helps to prevent instant speed interaction like counterspells or removal allowing us to get our combo pieces down with our fear. He also gives us the ability to cast our sorcery speed spells at instant speed. He also allows us to bounce a creature, artifact, or enchantment for a -3 to draw an additional card.

Speaking of our enchantments and removal package, we are running a pair of Oath of Kaya, a 3 mana Lightning Helix that also drains our opponents for 2 whenever one of our walkers gets attacked. This combos great with Baby Teferi, as we can cast it, and pick it up with Teferi in order to cast it again. We are also running a pair of Enter the God-Eternals. This is a perfect removal spell in this list, we can cast it at instant speed with Teferi, it kills almost everything in the meta at the moment sans a few select creatures, gains us life against aggro and it furthers our mill plan by forcing our opponents to put an additional 4 cards of their resources into the graveyard. Oh, and we get a 4/4 to boot. Its a great spell for the list.

In the best of 1 meta (which is where a majority of my play testing occurred), aggro is king, so we are also running a bunch of other aggro killers like 2 Moment of Craving, 2 Kaya's Wrath, 2 Golden Demise, and 2 Mortify. We need the removal. All of it. Moment of Craving is a great stifle against aggro, gaining 2 life and able to kill creatures like Adanto Vanguard. Kaya's Wrath is self explanatory, 4 mana - destroy all creatures. Mortify is not only great at destroying creatures too big for our other removal, but can also remove things like Prison Realm. Golden Demise, however, may confuse a few folks. There are 2 reasons I elected to run Golden Demise over something like Cry of the Carnarium.

1) Though exiling is our plan, I do want to be able to utilize Kaya, Orzhov Usurper's +1 to gain life against aggro.

2) I don't necessarily want to exile my own creatures. Of which, are in both the main and sideboard.

Lastly, we are running 1 copies of Syncopate and 3 Thought Erasure. We want to be able to tempo our opponents or counter their big plays. Thought Erasure is an excellent proactive spell, allowing us to pick our opponent's best card. And Syncopate allows us to hold up an early game counter or late game save us from a big Teferi or a Mass Manipulation and it also furthers our exiling game plan.

We do have a couple of other cards in here for our card advantage. We are running a play set of Opt, a fantastically efficient cantrip. In addition to this, we also have a play set of Thief of Sanity. Thief fits really well in a list like this, not only does it provide us with incremental value over time by giving us a card to cast from our opponent's deck whenever it deals them combat damage, but we also get to mill 2 cards every time we do it. The card is surprisingly effective and despite its 2 toughness body, can win you the game all on its own.

Lastly, I've got a bit of a surprise for the last card advantage piece. We are running 3 Aid to the Fallen. When having the need to have specific planeswalkers to win the game, Aid to the Fallen gives us the opportunity to play them early, get some value, and then get them late and finish the game. On top of that, we also get to have the additional benefit of getting back something like our Thief of Sanity, a card that our opponent will be spending their resources trying to get rid of.

Our sideboard is definitely weighted toward fighting control, with only some slight additional support for the aggro match ups. We are running 3 Duress in the board as an additional supplement to Thought Erasure. I learned my lesson hard at MagicFest KC, if you are running black, you are pretty much required to run at least 3 Duress in the board in this current meta. To also fight control, we are running 2 Dovin's Veto; this uncounterable negate is one of the best reason to be running Esper, in all honesty.

We also are running a pair of The Elderspell. Planeswalkers are everywhere, and for 2 mana we can either get our Kaya up to ultimate mode, or we can refuel our Ashiok for more mill. There may even be an argument to run a couple of them main, just for the Kaya single turn ult possibility. We also are running 3 Hero of Precinct One in the sideboard. The way I approach the Hero here is for a similar use to how Grixis or Jeskai would use Legion Warboss. Let it accumulate you value over the course of the game, and get it back repeatedly with our Aid to the Fallen. You can also consider bringing it in against hard core aggro decks like Mono Red or Gruul in order to get a bit more staying power and blockers; to be quite honest, I've tested that strategy a bit and it seemed to do okay, I just haven't tested it enough to know for sure. We also are running a single copy of Teferi, Time Raveler and a single copy of Teferi, Hero of Dominaria. Both of these cards are great against the control match up, and should be highly considered to be brought in.

We also are running 2 copies of Vraska's Contempt, we want to be able to deal with creatures like Arclight Phoenix or Rekindling Phoenix as well as our opponent's planeswalkers. I feel Contempt will be in an okay place in the current meta, but probably not main deck worthy over other options or strategies. Lastly, we have a single copy of Moment of Craving to bring in against more aggro lists.

All in all, I think the list is a lot of fun. Its a combo that people won't really see coming. I've had several opponents completely ignore Kaya without realizing that she can end the game with her -5, especially when paired with Ashiok. Often times, they are actually focusing down Teferi or Ashiok and leaving Kaya alone. It is important to note that Ashiok is better than it appears, the amount of disruption they provide is pretty amazing, and it can just completely turn off decks in the meta like 4c Command (Kaya fills a similar role, too, for that matter). This deck also has several different ways to win the game, but if you like comboing in order to deal 20+ damage to your opponent in a single turn, then give Esper Combo a shot, I think you'll like it. With the right tweaking for your meta, I think you'll find this list to be a hilarious addition to your meta.