Feast your eyes on a meta-crusher!

Long since the days of yore, have the stinky slimy Goblins of Mons roamed the planes of the Multiverse. Although, it has been quite some time since they have been this organized, and volatile. This deck is a Standard meta bomb. It feels and runs like a Goblin deck should. The synergy should be initially regarded as a little suspect given the limited number of Goblins we have in Standard - only 14 distinct creatures. However...

Let it be a testament to this archetypes power that these synergies are present, and that simplicity remains the centralized focus of this deck. Play lands, play creatures, attack, say go.

I feel, at this point, that the meta is leaning toward control themed decks. Mainly utilizing the raw power of Teferi and Niv-Mizzet, Parun to slowly but surely dominate the board. In my experience play-testing this deck list, those decks are just too slow to contend with the Goblins. I thought originally that maybe a UR Wizards deck would be the way to get to the ground fast enough. Those decks are good, but Goblin Chainwhirler eats W, RW, and UR aggro strategies for 4th meal. Goblins are back! Let's dive into this list, and I recommend you pick it up in paper (if that's your thing) before these cards spike. Just a loose prediction...

"Goblins like him are the spark to its powder."

I'm going to be honest: in my circles I have been bellyaching about Mono-Red decks for years. I have just had enough of Heart of Kiran (essentially a Red card), Chandra, Torch of Defiance, Glorybringer, and Hazoret. But, strangely, I find myself longing for the speed and efficiency Red brings to the battlefield now that we are approaching a new set. Yes, White is getting it done right now, especially when it splashes Red, but I love when we can revitalize an old tribe in Magic. We made Elves work with Elfball, let's make Goblins work too.

We have 7 one-drops in this deck. As one should expect with Goblins, we are finding value in getting to the board early, and Fanatical Firebrand is perfect for our plans. Fanatical Firebrand is a strictly better Raging Goblin. In fact, I would posit that the Firebrand is the new one drop goblin, out shined only by Goblin Guide, Goblin Lackey, and Legion Loyalist. Firebrand gives us turn one damage in combat and buddies with Chainwhirler to tamp down creature responses from our opponents. Goblin Banneret is a limited all-star, a pump effect that drops +1/+1 counters on our other creatures through Mentor speeds up the clock and makes trading in combat less equitable. Skirk Prospector gives us mana flexibility in an altar effect making us more nimble and responsive to our opponents play. It's all about outpacing the opposition.

"Eyes are unnecessary for seeing the future."

Dark-Dweller Oracle at 4 copies serves several purposes in our list. It depends on what your playing, but from a competitive standpoint most aggro lists should leave their lands up during attacks. This has two benefits: one your opponent thinks you have combat tricks, two we want to have access to mana in the event we need to sacrifice a creature prior to damage step to the Oracle. We can play a land we missed, or replace the resource on the battlefield. In a pinch, our goblin shaman gives us the ability to course correct and maintain our curve. The wording is very specific, it does not say that you may "cast that card," it says you may "play that card." We even get an explanation regarding the land plays. 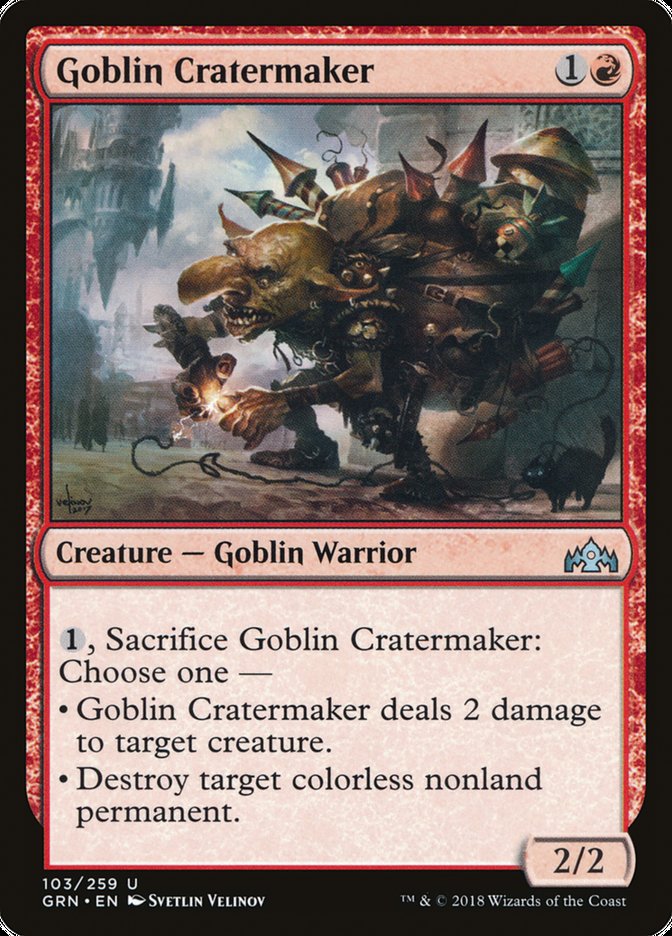 Our other two drop slots are filled by utilitarian little fuzzballs. DBoe and I brought up Goblin Cratermaker in Episode 103 of the The Main Phase. What an awesome uncommon! We can run a mana through him, sacrifice him and Shock a creature, or blow up a Karn, Scion of Urza! Pretty sick really, and Cratermaker is a 2/2 for two! It adds options, responsiveness, and utility to our game plan. Frankly, without some of the response elements Goblin Cratermaker adds to our list of 60, our deck would be much worse. Goblin Instigator, well, I wish it was a 1/2, but I understand why it isn't, we are in actuality getting two power and two toughness for two mana. The Instigator helps us go wider and faster.

"The trick is, once you get moving, don't stop!"

The magic is happening in our three drop slots - pun intended. Goblin Chainwhirler has taken a less dominant stance in the Standard meta since rotation, but we cannot discredit the power and value of this creature. It can give us a decided edge in mitigating token strategies, and a 3/3 first striker for 3 mana - well...outright amazing.

Goblin Warchief was first printed in Scourge in 2003 (same year and set as Siege-Gang Commander), and almost seems like an auto-include in Goblin decks that have a core strategy of overrunning the board. Not to be confused with Goblin Chieftain from M10 who lords and gives haste, or Goblin King from Alpha who lords and gives mountainwalk. No, the Warchief decreases the cost of our Goblin creatures by 1 colorless and gives our toons haste. Useful, and meant to expedite our board presence. Legion Warboss is without question Goblin Rabblemaster lite - or is it strictly better? I don't know; with this one, you decide. I do know popping +1/+1 counters on tokens is pretty damn gratifying with Mentor.

Our lower to the ground Goblins can, and do, regularly get the job done. In fact, in this Standard meta, it is rare that control decks have the capability to deal with a deck running 38 creatures. Creatures decks with this kind of consistency require a constant response to the battlefield from control, and even in match-ups where our opponents are running creatures, we can quickly outpace them. It's just so hard to deal with a Goblin Horde. Goblin Trashmaster is not a "great" lord, but he is a Goblin lord none-the-less, and nukes bad artifacts by sacrificing goblins.

Here's the real winner in our deck: Siege-Gang Commander. It's not like this is a new card, it's been around for nearly 15 years, but it is a total meta bomb. People don't know how to play against it. The most direct and immediate method to the madness is to remove it from play, and a "word to the wise" for any opponents who may see this list across the table: get rid of Siege-Gang Commander. It takes over games, it can systematically remove your creature presence from the board, it can burn your life total down to the ground, it can go wide in a way that is game-ending. Volley Veteran piles on the removal strategy for our deck, and in terms of curve, could not be better positioned. With an active Warchief, the Volley Veteran becomes quite lethal indeed.

"Turns out coffee, is the weird aunt of invention."

Let's talk about sideboard strategies. I won't keep you much longer. Should be quick.

Experimental Frenzy gives us the ability to convert our deck into an archetype that highly resembles the RW Weenie decks that include Heroic Reinforcements that are floating around. We dump our hand, drop Experimental Frenzy and no longer subject ourselves to the draw - instant top deck mode. Generally when we sideboard in EF, we also sideboard in our direct damage instants, Lightning Strike and Shock, and go to town! Although not represented in the image I also included an additional Goblin Banneret and two more copies of Goblin Cratermaker - they help us get even closer to the ground and board in over their respective CMC slots. Squee, because he's immortal, and is a perfect compliment to Dark-Dweller Oracle and Siege-Gang Commander - tons of shenanigans.

"If you want to kill a lot of Goblins, just make sure your defenses look like fun."

Look, I've been testing this deck online for weeks. I can tell you, that on both #MTGO and #MTGArena that this deck is a major disruption to the current meta. Most of the time this deck warrants a pause for concern from our opponents, they may think that a turn one Fanatical Firebrand reveals a deck they've seen before, but when the Goblin hordes begin rolling over the hills, they are often not prepared.

Buy this deck - it's around $60 in paper, and well worth the investment.

Until next time this is J.B. signing off, and remember to play a Land, a Fanatical Firebrand, swing for 1, and Say Go.