Behold! Leathery wings of doom, fire, calamity, and a little bit of love.

War of the Spark is 9 days away, and I will be honest with all of you, I am very excited. I feel like the brewing potential created by adding this set to the Standard pool is outstanding.

If I were a betting man, and I am, I would bet you that we are going to see all manners of new brews, new decks, new winners emerge from this expansion of the Standard card pool. It's going to be an exciting time to be a Magic player when War of the Spark drops. Let's revisit an old favorite made better through the addition of some cards before we get too far off in the deep end?

So here he is: Nicol Bolas, Dragon-God. The new and improved version. Although, if you ask me he pales in comparison to the flipped version of Nicol Bolas, the Ravager. This version is the omnipotent kind - the one with all Planeswalker abilities, the one with minus 8 ability so powerful it wins you the game. This Nicol Bolas is so good, and so powerful, that we have to blow the dust off of Grixis and build a deck to help him cast The Elderspell. Unfortunately, this deck is merely conjecture at this point, we have no idea where the meta is going to shake out, but dammit, I'm going to try and have my hand in shaping it. So, while this Planeswalker is just a piece of the larger whole, I want you to know that he is critical in our game plan for success.

I LOVE THIS PLANESWALKER. Sarkhan the Masterless was one that DBoe got a chance to see before I did, and he knew I would go wild over it. I know, I know, trying to pull off a mono-red Dragons list in Standard isn't smart. So I won't, even though I really really want to. So I've compromised with all of you and generated list that has been remarkably successful in testing. It's crushing meta decks. Sarkhan turns our on-field Dragons into Caltrops. The bigger our force the more damage we deal to attacking creatures. His +1 let's us attack with our Planeswalkers - we are running 4 - and he can generate tokens to add to our offense and defense. This version of Sarkhan is awesome, and I expect this is only the first of a few decks I brew with him.

Sarkhan, Fireblood can make a Dragon deck scream. We need mana acceleration in a Dragon deck, even if it was mono-colored, which this one is not, and I feel we get exactly that with this Planeswalker. Generally, this version of Sarkhan drops and immediately becomes a target. He has the ability to +1 and fix our hand (or ruin it - it's a gamble), and if he survives until the next turn he can drop out a big nasty Dragon and demand responses from our opponent. Dragons, in general, are a class above other creatures in Magic. Frankly, being able to add two different mana of different colors makes Sarkhan, Fireblood our ideal play on turn three, and in the eventuality we get to activate his -7 ability and create 4 5/5 Dragons. Well. It's never pretty. Sarkhan, Sarkhan, Sarkhan.

Angrath, the Flame-Chained is not a Dragon, but since the spoiler season for War of the Spark has concluded I have been feeling like Angrath is a worthwhile addition to any deck with a mana base built to support Rakdos. The idea of being able to impact the hand on the +1 ability at turn 5 (or sooner with a Dragon Hoard in play) is fantastic. Strategic placement of the discard mechanic is an art, and since we are needing 5 mana to resolve Angrath we often catch the best of what our opponent is holding for the mid-game. His -3 gives us the ability to alpha-strike, slow the opponents board, and generally wreck havoc. The -8 ability is seldom used unless it's a win-con. Honestly, another copy of Verix Bladewing, or Lathliss, or a single Demanding Dragon might do better here, but MEH.

Blot Out the Sun

What is a Dragon deck without Dragons? Answer: not a Dragon deck. This is not an aggro deck, rather it presents itself cleanly as a control deck with top-end finishers. But, it is versatile and dynamic; just because our deck leans on control-esque elements does not mean that it cannot get off to the races quickly and win in the creature spaces of MTG.

I struggled long and hard with this card. Dragon's Egg is another totally viable choice, and gives us Firebreathing. The idea is to get maximum benefit from Sarkhan the Masterless by increasing the number of Dragons on the battlefield. Since we are running two versions of Sarkhan, I have found the Whelp to be excellent in tamping down token strategies, being a nuisance to life totals, and keeping Planeswalkers in check. Multiple copies of this little turkey can prove to be outstanding by not only adding targeted direct damage to our arsenal, but by also creating a more restrictive combat step. You can plus a Sarkhan, Fireblood and tap one land for 2/2 flyer. Thief of Sanity is another strong contender for the 3-drop slot. But that's not fun - who wants to win every game they play?

Verix and Karox are excellent additions to the deck. We get two 4/4 Dragons for seven mana. Our mana base and additional resources are tailored specifically to ensure we are not missing land drops and have the ability to cast our cards. Again, 8 power flying for seven mana is nothing to scoff at. Our additional layers of draw synergy and defense through Sarkhan the Masterless are greatly bolstered by including these two legendary Dragon brothers.

As far as Dragons go, Skarrgan Hellkite is right among the best we have in Standard. It can ETB as a 4/4 with haste or a 5/5 with the ability to Shock any target for 4 mana. It's nice having this additional mana sink mid-to-late game and can be the final points of damage we need during a combat step. We may not be getting the best value out of Skarrgan Hellkite - no, the best use would likely be in a deck that allowed us to resolve it with haste and then place a counter on it from another source for the activated ability later. For our purposes though, this Dragon will do nicely. Again, we are leaning on resolving him early with Sarkhan, Fireblood or using him later with Sarkhan the Masterless for all manners of nasty creature control. 3 copies is the way to go.

Our Planeswalker presence during our matches is what matters most; it just so happens that a majority of our Planeswalkers are Dragons or Masters of Dragons. So, you see, we need Dragons. Lathliss, Dragon Queen at a single copy is good for us, she can produce huge sums of damage within the right scenario by buffing our already massive flyers. She also triggers and creates a 5/5 Dragon token for us each time we resolve another Dragon creature. My favorite part of Lathliss is that she immediately draws targeted removal. She is the peanut butter on your catfish lure. There may be no reason to run this dollar bin rare at all. If we are trying to be super competitive we likely have better includes. "Includes" that are better tuned to the meta.

I had some initial temptation to call this deck "Bolas Tribal." I elected not to even though that would likely get more clicks. Interestingly enough, driving traffic to the site has been rather challenging, and most of you who I want to read and comment on this deck will likely never do so. Prove me wrong. Anyway, Nicol Bolas, the Ravager is still an amazing card; there is a good chance that we will continue to see him as an addition in several different variations on a theme. I love the idea that we are getting the best of both worlds with this card and the main two lines of our deck: 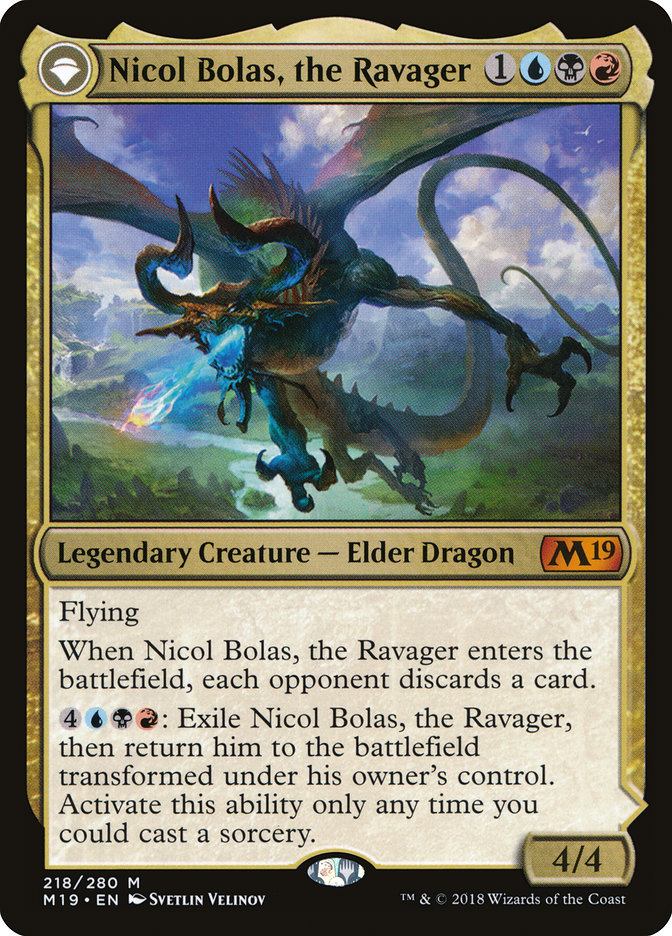 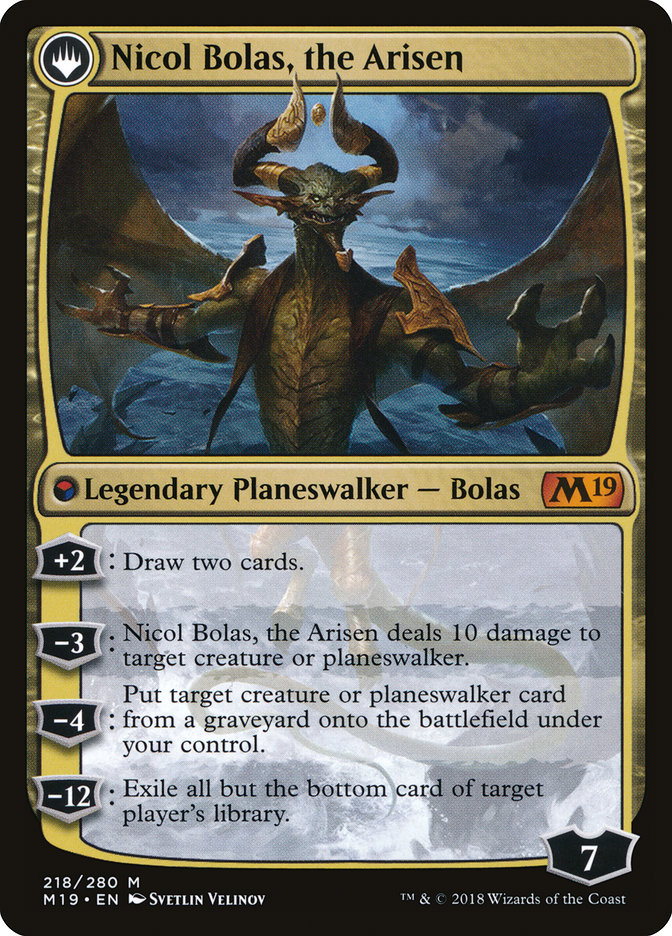 We are getting a Dragon on curve to pop a counter on our Dragon's Hoard for additional draw. Nicol Bolas, the Ravager causes our opponent to discard a card on the ETB and at a 4/4 for 4 mana we are getting some great pressure to the life total. At sorcery speed we can flip the Ravager into Nicol Bolas, the Arisen; I personally believe that the M19 version of Nicol Bolas is far more powerful than the War of the Spark version, that is until we have several Planeswalkers on the battlefield and we are blowing out the static ability of having every Planeswalkers abilities.

The majority of the decks I play against are creature based, designed to kill you by turn 6 or 7 and aided by Planeswalkers in their strategies. These cards are control staples, with some new flavor in the form of Angrath's Rampage, intentionally included in this deck to be prepared of majority of what you will also face when you are playing it.

There's definitely more to this list than meets the eye. I will continue to evolve this list, and it all anchors in Sarkhan the Masterless; really when it gets right to it, with a full commitment to Sarkhan you only need the Planeswalkers to be able to potentially alpha swing on his +1. But, I want to play Dragons, and I can't really make mono-red Dragons work at this point. Dragon's Hoard is included for draw and mana fixing - three colors requires that we have diversity in our mana base. The level of control in the Standard meta these days requires that we be drawing cards and replacing our threats. Dragon's Hoard does all of this and more. I am a big fan of this card. Verix and Karox give us two counters, Lathliss's tokens, Sarkhan's tokens, etc. It just works.

Your immediate reaction to this deck maybe to question the competitive nature of the list - maybe you have concerns with its usage of common staples found in standardized Standard. Have no fear, we can easily convert this deck through our sideboard into a control monster.

We really begin dialing back our Dragon lines of play into heavy control with Thought Erasure, Negate and Duress. Hand destruction and counterspells are the bane of noncreature spell heavy/centrist decks and often pave the way for our own mid-to-late game shenanigans. I will slice out almost everything but the Bolas Walkers and new Sarkhan to accommodate control if needed. It just depends on how deep down the rabbit hole we want/need to go.

Another copy of Ritual to thrash token and early aggro. Massacre Girl because she is awesome and gives additional Languish style affects for big creature decks. Ionize for more honey bunches of nope.

Well, that's all folks! I hope you like this deck. It's a great place to start when the hashtagWAR Standard meta kicks off at your local LGS.

Until next time, remember to play a shock land tapped and say go.