Green-White has long been a color combination for token shenanigans. Blue too, and Red...and I guess Black...all have the same token capabilities in some facet, but not in currently in Standard. As we approach the end of the Guilds of Ravnica season, and roll into the New Year, I wanted to share with you, my dear friends, a deck I brewed and have been playing for a few weeks now.

As spoilers continue to drop today, I can assure you that this list will be the last we post that does not include Ravnica Allegiance cards. Our goal (personally and professionally) is to be prepared on the first #FNM of Ravnica Allegiance to bring the brews! Our podcasts will be aimed at creating hype around the new set, and helping you prepare for global domination as well - steel yourselves!

More on that later. We have a really special, and by "special" I mean tremendously fun deck for you to review, build, and play today. In paper, or on #MTGArena, this deck is fantastic. It goes wide, and leverages some under-utilized cards in Standard to really go bonkers. Game one against certain decks we can experience some "sad times," but our sideboard options tend to repair our game plan rather efficiently and effectively.

By this point, we know what decks people are playing in Standard. People have gotten comfortable with the status quo, and generally aren't expecting you to show up with a brew that face-rolls their meta anchored style. To the brew!

"Whatever hatred destroys, a single act of trust can revive."

I really, really like Emmara, Soul of the Accord. This is an sooper dooper legendary Elf Cleric. Left unchecked (and she never is), she can completely take over a game. Especially against control variants or slower moving decks that are trying to get to mid-game. Of course, in this current meta, don't be surprised if the UR Drakes or Jeskai Control player you are sitting across the table (or internet) from casts Shock or Lava Coil on your endstep. We kind of want to draw that removal early anyway, because our opponents can't draw enough to keep us off the board entirely. I originally ran 4 copies to see her turn one as often as possible. I elected to bump her down to 3 to see more of our tokens generators. Either way, any two land hand with Emmara is a keep.

Right now, for creature deck archetypes, I don't think there is a better turn one play than Healer's Hawk. I have been relentlessly showcasing this card due to its insane value, and made sure to include it here. We get to optionally swing for two, have evasive damage, and can chump a flyer in a pinch. Great card, Healer's Hawk, 3 copies make it in here. We are attempting to go wide with this deck, and Jungleborn Pioneer needed a home outside of being a fantastic #IXL limited and draft card. I love that we get three power and toughness for three mana with the Pioneer, and a token with hexproof for later "worrisome" possibilities from our opponents.

Knight of Autumn is a defensive measure - two copies in the mainboard and two copies in the sideboard. We want to be able to interact with artifacts and enchantments without having to burn a Conclave Tribunal to do so. We also need to be able to recoup a little life when racing faster decks or RB burn, and drop a reliable beater for finishing purposes or equitable trades during combat. To round out our creature selection we have another token generator in Mavren Fein, Dusk Apostle; he swings, we get a lifelinker, pretty simple, and he fits into our three drop slot to smooth out our curve.

Stay with me - we have a plan!

At first glance, the creatures we have chosen may not appear to be a "winning team" all by themselves, and I would say that "you are correct." But they serve a larger purpose...a higher cause. We have the ability to turn our early aggro plan into mana generation. Song of Freyalise is a bomb. Frankly, I don't know why this card hasn't seen more play, and why it took me so long to build a deck that can reliably leverage its potential? The third chapter of this Saga, is exactly what we need to dramatically increase the value of our non-rare and non-mythic creatures - we are getting a big combat step in a wide fashion - we are growing our ranks and files. For two turns we profoundly increase our mana production capabilities allowing us to burst, and potentially capitalize on the name sake of this deck.

Holy Moly - I'm telling you - you can expect a lot of brews coming from me in the coming months that have minor or major inclusion of this Planeswalker. I feel like we are finally getting there. Yesterday, Tesya Karlov was spoiled, and boy-oh-boy, just this just scream Abzhan tokens? Saprolings and Vampires...who would've thought they would be such faithful companions? At any rate, in our deck Huatli, Radiant Champion is run as a 4x resource. If we are able to capitalize on our "go wide" strategy, and hit her emblem, our deck turns on in a way that is nearly impossible to deal with. We begin drawing obscene amounts of cards, playing more creatures, and drawing more cards. The game can end quickly; let's talk about our token creation and finishers.

"Convoke This!" & Other Slogans

March of Multitudes is an dynamite utility card. It feels terrible to have it countered, trust me, but we rarely are casting into available blue mana, and being Instant speed gives us some incredible options. When we are timing our lines well with this deck we have the capability of generating amazing amounts of value from a well-timed March. March is often our finisher, our ability to stabilize, and a considerable boost, and protection for Huatli all rolled into one. Nothing says "whoopsie" to your opponent quite like casting March on their end step prior to hitting chapter 3 of a song of Freyalise on your next turn. Total win.

Saproling Migration is great on turn two and great on turn 6 (or sooner with Freyalise), and gives us more fodder (and mana production) for March of the Multitudes and Huatli. Spore Swarm is an instant speed mini-March for our deck, and can reliably stifle aggro strategies. Once we have a Huatli emblem online, and make no mistake that is exactly what we are trying to do, these spells become very powerful indeed. We are generating more minions and drawing more cards to generate more minions. Fun as heck - lethal as heck.

To round out our utility, and variety in the deck, we have added a number of other spells that help us remain competitive. We need ways to bolster our forces, provide various recursion and filtering methodologies, and spot remove problematic elements of our opponents board:

We are running a bunch, and I mean "a bunch" of little creatures in this deck (called Tokens - durrrrrrr), we are obviously trying to overwhelm our opponent in a rush. The Convoke ability allows us to utilize our little dudes to expedite the casting of certain spells - Conclave Tribunal and March of the Multitudes specifically.

Ajani, Adversary of Tyrants adds support for our early creature strategies and also can potentially provide us with a game ending emblem when we hit his ultimate. Ajani's +1 and -7 abilities are what we are using, although in rare instances I could see bringing back an Emmara that walked headlong into a Lightning Strike (but not a Lava Coil). Vivien allows us to dig to correct mana and find creatures that generate tokens, and also provides some much needed removal. What her ultimate emblem represents in a deck that as consistently produces tokens as ours does is quite devastating indeed - 8 Vigilance, Trample, Indestructible, Lifelink 3/3 Soldiers?...Yes, please.

Why do we fall down, Master Bruce? So, we can learn to pick ourselves back up...

Shalai, Voice of Plenty is a great Angel. Brimming with value and feathers. Most of the time when you see her in a deck list, it is because that deck list's pilot is attempting to create a hexproof scenario for themselves, their planeswalkers, and their creatures. We are too, but by default. I wanted to include 4 copies of Shalai in our sideboard to leverage her second ability, and pump our army of tokens, turn after turn. We have mana flexibility through Song of Freyalise, and I don't know that I've fully explored its uses in this deck, but it seems pretty good. Yes, 4 copies should do nicely and provide an excellent buffer for Huatli to emblem.

Drop all four non-Huatli Planeswalkers and board in 4x Shalai against removal heavy decks for maximum LOLS. Settle the Wreckage is an include at 2 copies for blowout potential, it can be particularly devastating when we have a Chapter 1 or 2 Song of Freyalise in play and our opponent isn't expecting the spell because our mana resources are hidden. Lyra is included at two copies because we are not alone, and we never were. Lyra wins games.

Again, two more copies of Knight of Autumn for value and utility.

Pride of Conquerors is a kill-switch to use on our opponents, being able to Ascend is effortless for us in this deck and we should bring in this card to only complicate matters and to provide us with a hidden combat trick that can potentially represent lethal. It's such a massive sleeper, and should be used as such. 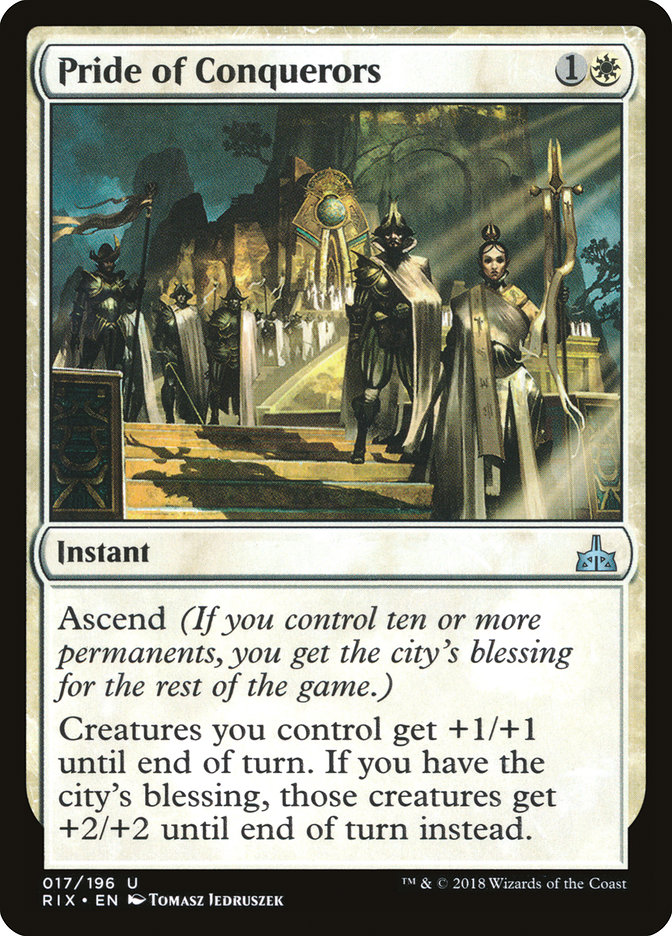 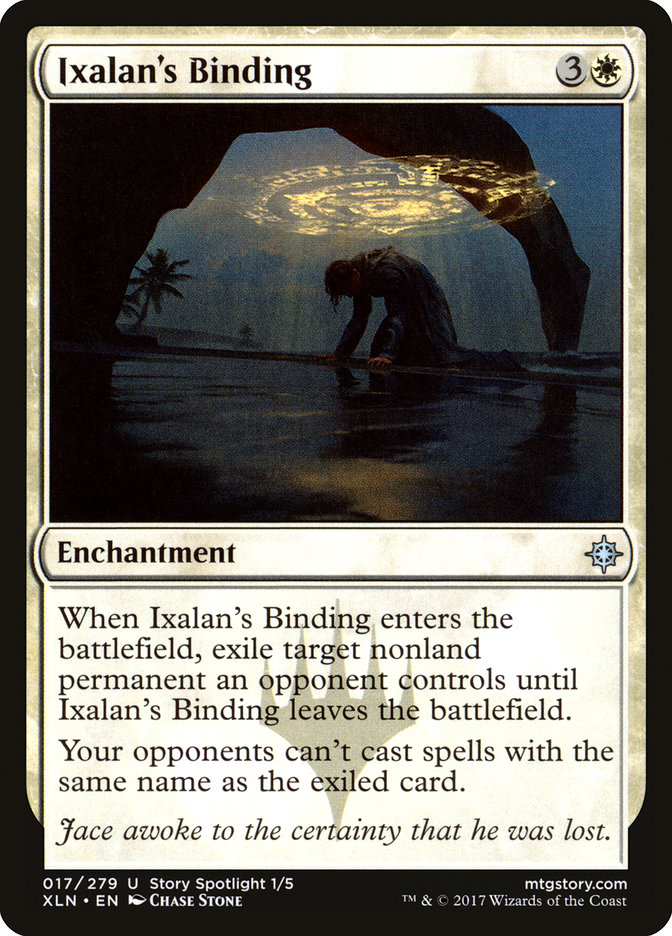 We include Binding for a 1 for 1 switch with Conclave Tribunal. Sometimes we need things to stay gone.

...and I will be taking this deck. We will provide a small update on this decks performance on next weeks podcast, and I hope that if you get a chance to build it, that you are finding success and FUN in playing it.

The brew articles at LandSayGo will include spoilers two times a week leading up to the release of the new set Ravnica Allegiance on January 25th, 2019. Stay tuned for some sick decks, folks!

Until next time, Play a Land, and Say Go.