This list is brought to you by your friendly neighborhood Dboe.

For the longest time, white has suffered from the lack of both significant card draw and mana ramp. Wizards of the Coast attempted to solve some of these issues with cards like Mentor of the Meek and Knight of the White Orchid, among others, but they all really fell flat. Well, with the entry of Ravnica Allegiance, one of those struggles can become the way of the past.

Smothering Tithe (of which we play 3 in this deck) is a perfect enchantment, in my opinion. It perfectly encapsulates what White wants to do in the game, while also fixing one of the weaknesses of the color. For 3W we get an enchantment that allows us to create treasure whenever our opponent's draw a card, unless they pay 2 generic mana. Effectively, this is mono white mana ramp, and to be honest, I'm surprised the design for it took over 25 years to come about. I can guarantee you, most of the time, you opponent isn't going to want to pay the tax, granting you a free mana every draw step. And not only that, but against Blue card draw decks? You'll be drowning in treasure. So, how do we weaponize that in order to win the game?

I have for your consideration today, Karn's Heist. It is an Orzhov list that introduces some unique control elements in order for us to slow the game down until we can piece together our several win conditions.

This deck runs a play set of Tithe Taker, Kinjalli's Sunwing, and Tocatli Honor Guard. Each of these cards are specifically hateful to strong decks in the meta. Tithe Taker is a great answer early to counter spell control, as it taxes them to cast spells on our turn or activating flipped lands like Azcanta the Sunken Ruin or an Adanto. Coincidentally, it is also hilarious up against free activation creatures like Doom Whisperer or, specifically, Runaway Steamkin. It's especially funny against the Steamkin as the ritual effect of getting 3 mana now costs a mana to activate (or more if you have more in play) forcing your opponent to heavily rethink their plays. This card is also great against reactionary decks as well that want to be destroying our creatures or permanents on our turn. And, an ability that should not be overlooked, it does have Afterlife 1, granting us a little bit of staying power against a board wipe (of which, we'll probably fire on ourselves).

Kinjalli's Sunwing is a great, forgotten answer to heavy aggro lists. It is especially great against decks with a lot of Riot or Haste in them, as your opponent's creatures will all enter the battlefield tapped, granting you an additional turn to deal with any major threats. We also have a 2/3 body that can come across in the air. This creature alone has done nearly 10 points of damage in some games, allowing us to slow the game down.

Tocatli Honor Guard is another great hate bear in this list. As a 1/3 of 1W, it stands up well against early aggro, blocking a lot of potential damage coming our way. Remember, we want to be slowing down the game, so having a creature like this will be important. the Honor Guard also has the added ability that creatures entering the battlefield do not cause abilities to trigger. We luckily don't run any creatures with enter the battlefield triggers, but our opponents will likely be playing Viashino Pyromancer or Ravenous Chupacabra or a Jadelight Ranger. Tocatli Honor Guard will also just straight up hates out Golgari and the random Naban wizards deck.

We are also running several control spells in this list as well. We are running 2 Cast Downs and 2 Mortify. Cast Down, as you are likely aware, is a great way to take care of those pesky creatures, large and small, so long as they aren't legendary. A fantastic little spell for only 2 mana.

Mortify is a lovely spell here as it quite flexible. For 3 mana, we can kill a creature or destroy an enchantment. This card allows us to sure up removal against legendary creatures that Cast Down won't, or to destroy enchantments like Search for Azcanta, Seal Away, or Ixalan's Binding. It is strong here, and it can help save us if they happen to catch our few win conditions with enchantment exile effects.

To wrap up the targeted removal, we are also running a pair of Vraska's Contempt. Being able to hit planeswalkers at instant speed is especially important, not to mention being able to stop cards like Arclight Phoenix or Rekindling Phoenix can win us the game. The incidental life gain provided to us should also not be overlooked. Again, our main strategy is to prolong the game until we can force through a win.

The last part of our removal package is 4 Kaya's Wrath. Four mana wraths have always been notoriously good, and Kaya's Wrath is no different. It doesn't matter if we end up killing our creatures when we resolve this spell, they aren't our main win condition (though they can help). Not to mention, even if we do kill our creatures by wiping the board, we still get that incidental life gain that helps us stabilize further. 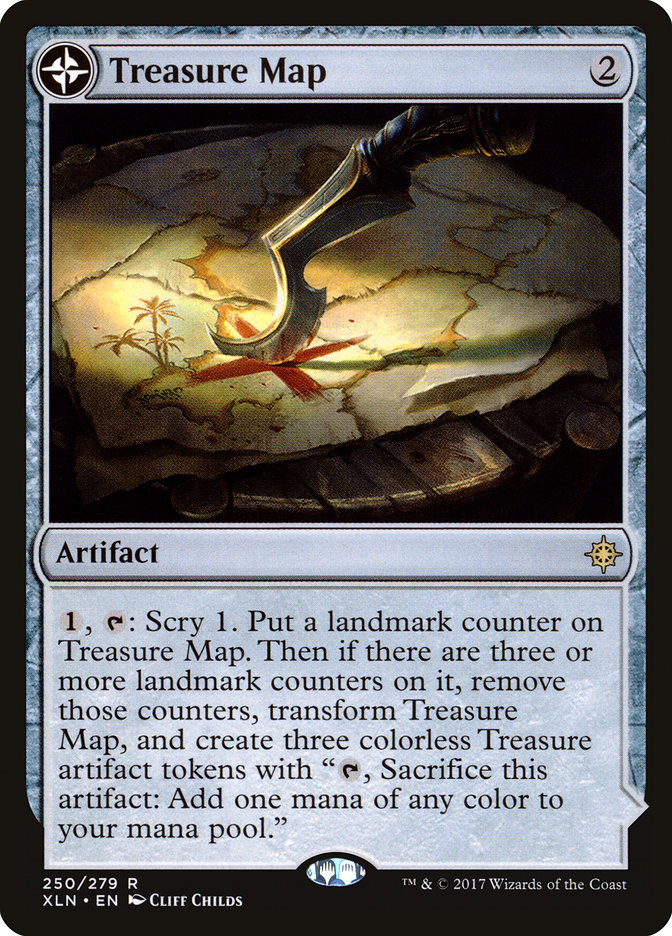 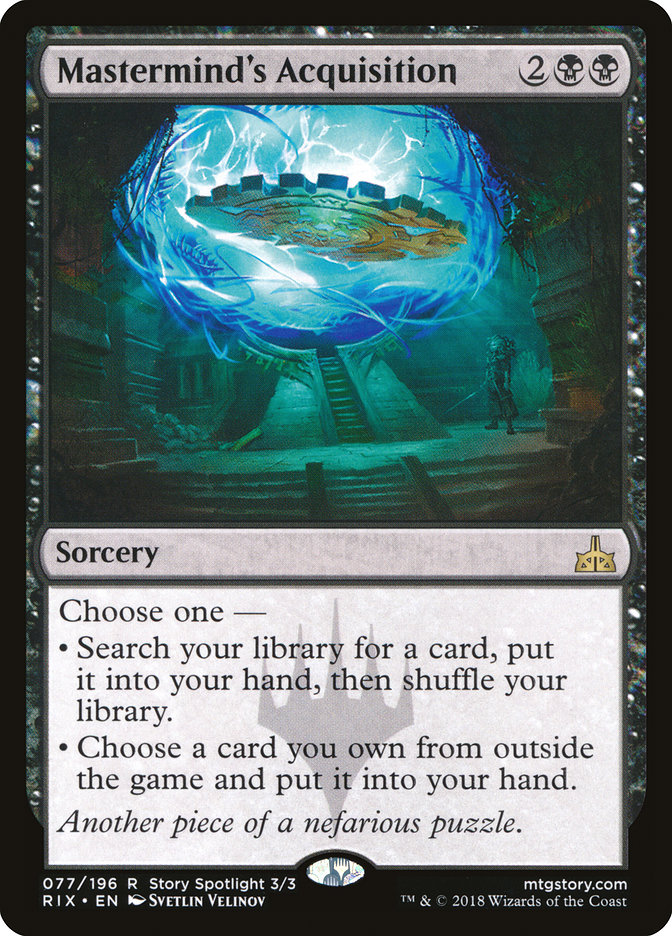 Because our strategy can be a bit of a glass cannon, we need to be able to smooth out our draws as best we can. Therefore, we are running a full play set of Treasure Map. Being able to scry the top of our deck away before drawing a dead card is perfect in this strategy. Not to mention, when it flips, we get 3 treasure plus a land that can provide us with mid game card advantage by sacking treasures. This card combos perfectly with Smothering Tithe, since we'll be getting at least 1 treasure a turn cycle (assuming they don't pay the mana).

We are also running 1 Arch of Orazca (though, I can see arguments for running at least 2, dropping a basic for it). Since we will be drowning in permanents with Smothering Tithe, we often will have The City's Blessing, allowing us to use the Arch with either our unused mana or unused treasures, if needed. This card fits this deck perfectly. If you decide to run three or four, then you'll want to start taking away your other colorless lands, which in this deck is Field of Ruins. Make this decision really only if your meta doesn't have a lot of flip lands.

To better find our pieces, we are also running 3 Mastermind's Acquisition. We are often times generating an absolute ton of mana with Smothering Tithe, so Mastermind's Acquisition allows us to tutor up not only our needed removal, but also our 1 main deck win condition, but our 2 sideboard win conditions as well. The 4 mana tutor doesn't matter when you are sitting on 12 or more mana.

Finally, we get to the meat of it, our win conditions. Our only main deck win condition is 4 Karn, Scion of Urza. This card also fits into our card draw section, as it helps continually by keeping our hand full. Really though, we are looking to get our Karn out of reach and then start creating Constructs with his -2 ability. These 0/0 constructs get +1/+1 for each artifact you control, and being in a deck that can generate so many free treasure artifacts means that these constructs can often be 6/6s, 7/7s, or higher. We then proceed to beat down our opponent, finishing them off as we roll through their creature blocks. What's even more hilarious is that if we have a Kinjali's Sunwing in play, we can also prevent our opponent's from casting a blocker, as all of their creatures will enter tapped, allowing us to swing freely.

We also, as I alluded to earlier, have 2 (really 2.5) win conditions in the sideboard that we can tutor up with our 3 Mastermind's Acquisition. Our honorable mention is Profane Procession, we'll have plenty of mana available to cast the enchantment and even exile a creature, sometimes 2 in the same turn. Eventually, when we have 3 or more creatures exiled under this 3 mana enchantment, we can flip it into a land that allows us to pay 2WB to get any one of whatever creatures we exiled. This card can be a great way to answer a Niv Mizzet, Doom Whisperer, Lyra, or even something like a Ghalta. These powerful creatures can win us the game once we have Profane Procession flipped.

Our more obvious win condition is a 1 of Revel in Riches. This 5 mana enchantment gives us the ability to create a treasure whenever a creature an opponent controls dies (something we'll be trying to do on a regular basis) but with the added clause of winning the game on our upkeep if we control 10 or more treasures. I've had this win before with this deck, and it is glorious. You end up producing so many treasures that this card just provides a way to inevitably win the game.

Our last win condition in the sideboard is a single copy of Banefire. We've all been in those matches where players are casting random counter spells, ruining our day. Well, if we've been consistent with dealing our opponents damage, then pulling a Banefire into our hands using a treasure to produce our red mana, we can assuredly cast a lethal burn spell right to the chin. What's more, Banefire (an XR casting cost spell) can't be countered if X is greater than or equal to 5, an easy feat in our deck. Another plus to running Banefire is that often times in the counter control match up, if they don't know that you are running a Banefire in your sideboard, they often times won't counter your Mastermind's Acquisition as they will expect to catch whatever spell you tutored up for it. And since Banefire can be uncounterable, it can really hose your opponent's plans.

Lastly, let's take a look at our sideboard. Up against noncreature decks, we are running 3 Duress to catch their important spells. There are also 3 Kaya, Orzhov Usurper, a planeswalker that can also win us the game with her ultimate if we get there but is a great answer to aggro lists gaining us life whenever we exile a creature from a graveyard with her +1. That +1 also is an effective way of getting rid of Jump-Start spells like Quasiduplicate and Chemister's Insight or recursive threats like the Phoenixes, Gutterbones, etc. Not to mention, she just dumps on any 1 mana or less non land permanents on the field. Against combo and control we are also running a pair of Arguel's Bloodfast. By adding to our draw potential in the deck, it gives us the opportunity to power through to find the needed answers to what our opponents are doing. Lastly, we are running some Ixalan's Bindings. This card is great against planeswalkers, impactful or recursive creatures, and even the shenanigans that are Persistent Petitioner mill decks, as it prevents them from casting another from their yard and hand.

This deck is a lot of fun and it is difficult to pilot correctly. There are a lot of triggers and tax effects that you absolutely need to remember with this very synergistic list. You want to draw out the game long enough to get quite established, but once you do, you'll be churning through your deck and sideboard and winning fairly quickly. I don't suspect that this list will get you a 5/0 finish, but if you are looking for a fun and intricate deck as an FNM special, then pick this one up, I think you'll have a blast playing it.