This is a personal brew created to satiate my boredom. I have always had an affinity for Dragons - geeky like that. I've been tuning this list for about a few weeks, and I think it's ready for public consumption. I wanted to craft a deck that showcases when I am happiest playing the game of Magic. A quick glance at the deck may lead you to believe that it is rather clunky.

This deck is very deliberate. We are trying to successfully resolve big capable Dragons, and punish our opponents for thinking their less than superior creatures stand a chance. This deck, again, reflects an archetype that really makes me happy. Planeswalkers, powerful artifacts, big fun aggro, and Burn. I'll likely shift heavily into a Rakdos base for my Standard brews once we have access to Ravnica Allegiance, but this works for now.

This deck responds to the meta in a very unique way - we simply dump a puzzle we've assembled a hundred times in front of our opponent and expect them to solve it before we can. Our creature damage is highly evasive and places a mandatory response in front of our opponent. We have a little hand destruction. We have little draw card potential. We have more game ending threats than we probably should. We have an excellent creature control package. We have some really selfish options in the sideboard. But, most of all we have each other and our local game shops.

Nicol Bolas, the Ravager is just clamoring for some Rakdos style removal - the God Pharaoh is used to casting spells like Terminate and Dread Bore. Unfortunately, he is making due with a borrowed creature and planeswalker removal technique in Vraska's Contempt - which we don't use, we use Spit Flame. Will we see the return of powerful two mana removal with no upside for the opponent (Assassin's Trophy)? I don't think so, but I've been wrong before. Back to the Dragons. Gold ones first:

Bolas is our turn four play. An optimal curve for the sees us playing a tapped dual land on turn one, keeping up or using Lightning Strike on turn two, Dragon's Hoard or Sarkhan for mana efficiency on turn three, followed by Big Daddy Bolas on turn four. Of course, things don't always go according to plan and we may be dropping a Demanding Dragon or playing the creature control game on turn 4. In rare instances, you may see yourself doing nothing, but generally not, as doing nothing on turn 4 tends to be a losing play.

Palladia-Mors is back in Core Set 2019. First printed in Legends, this Elder Dragon is an amazing threat, one that with Sarkhan's help we can belch out on turn 4 fairly consistently. Flying, trample, vigilance, and hexproof until it deals damage. DBoe thinks we should be running a single copy of Helm of the Host for posterity here, and he may be right. For now, we aren't going for shenanigans - especially DBoe's shenanigans - rather we are trying to win games. The #M19 version of Palladia-Mors is a far cry better than the antiquated, oppressive upkeep laden version of the Legends era. This year #WOTC was focused on remembrance, and their work with the Dragon Legends was classy.

#M19 Darigaaz Reincarnated is an incredibly powerful card, resolving a copy on turn 5 demands an answer or almost certainly spells doom. No single direct damage spell your opponent could (reasonably) have access to on turn 5 or even turn 6 could equate to 7 toughness. So it stands to reason that the response our opponent has to have to a 7/7 flying, trample, haste creature is instant speed destruction or exile effects - Seal Away and Contempt. In fact, exile really is the only way to permanently deal with a resolved Darigaaz Reincarnated. The fact that she returns to the battlefield after being destroyed is ruinous. It represents all the good things about #MTG.

Verix and Karox make a predictable appearance here. When our deck is running well, we usually have access to 7 mana, and a combined 8 power and toughness between the due is a wise investment on our part, 4 for a 4/4 flyer ain't bad in a pinch either. Demanding Dragon is an interesting card, one that has been seeing quite a bit of play since being printed. 5 damage is no small ding to the life total, and in the event our opponent doesn't want accelerate their demise, they can elect to sacrifice a creature to satisfy demands.

Lathliss, Dragon Queen is a really good card. She is a fear-instilling token generator and gives every dragon we have fire breathing in a red mana pump effect. It just screams old school Shivan Dragon, and has upside. If we can resolve her, and keep[ her alive for even a couple of turns for follow up Dragons, it often ends the game pretty quickly. 😜 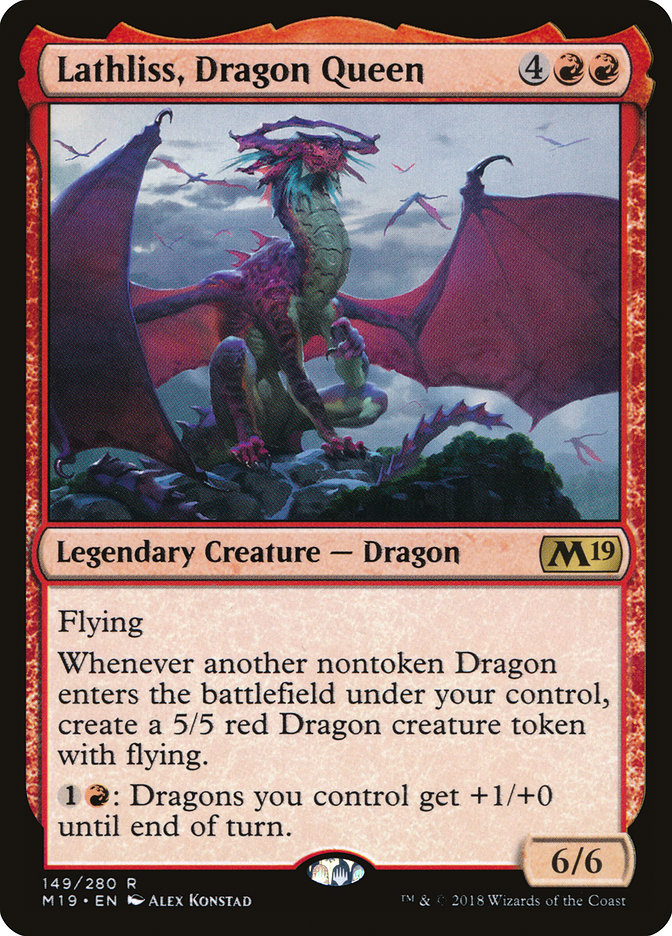 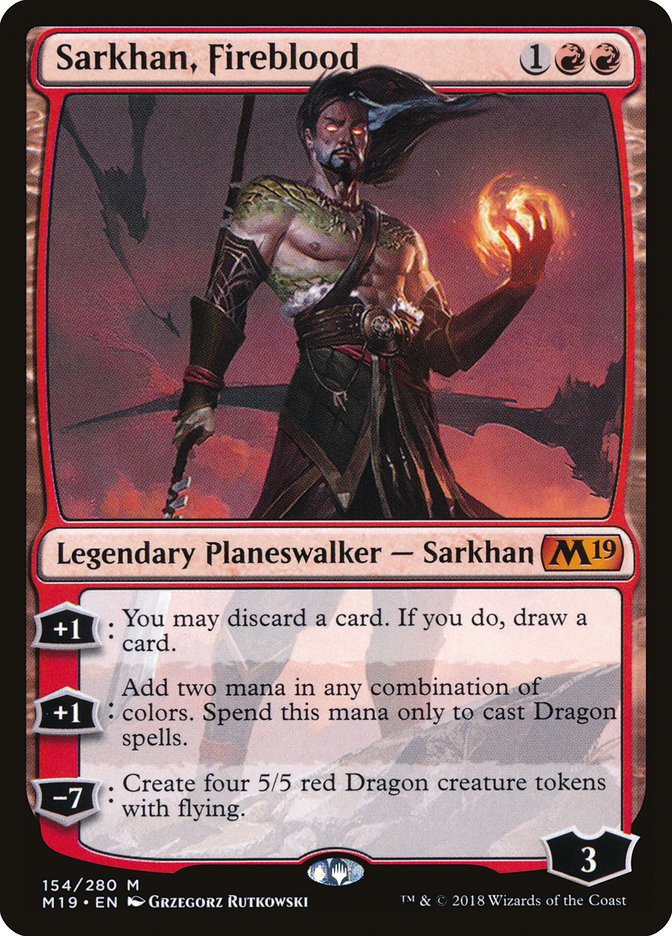 Sarkhan, Fireblood was seeing a good amount of competitive play in the beginning weeks of Core Set 2019 release, and I still think his plus one loot mechanic is dynamite. But, here, when our curve is trying our ability to withstand aggro reliably he becomes in valuable. What we are missing thus far is a way to control aggro strategies, LandSayGo has you covered.

You would be right to criticize me for not dropping a creature until turn 4. Go ahead, I can take the rub, and even offer rebuttal for your rebukes. One for one removal strategies are strong in this meta. Even Ravenous Chupacabra is essentially a one for one interaction given its Forest Bear qualities. I love the Hammer of Bogardan feel to Spit Flame. 4 Damage, at instant speed to a creature, and most of the problematic threats we face ,namely Wildgrowth Walker and Benalish Marshal, die to the spell. Recursion for one red mana. MM-MMM.

Lava Coil is an all-star removal spell. Again, 4 damage to a creature, and when it dies we see it exiled from the game, the meta is beginning to shift, but I am confident that having the option to remove a potentially accessible creature card from our opponents graveyard will remain an important caveat as we approach the next sets release in January, and the meta truly becomes solved. Lightning Strike is not Lightning Bolt, but we do what we can with what we have. Sometimes you need three damage extra after combat, sometimes we need to respond to an enter the battlefield trigger, or foil our opponents combo plans. When you absolutely positively must deal 3 damage to the chin - Lightning Strike - accept no substitutes.

Smoothing Out the Mana...

Dragon's Hoard gets me all kinds of pumped up. I know the card pales in comparison to say, Vanquishers Banner, in terms of pumping our creatures and offering a consistent triggered draw mechanic, but this artifact is perfect for our 4-Color deck. In the event we are unable to drop a Sarkhan on turn 3, but still want to set up for a decent turn 4 play, we can reliably depend upon the #WUBRG resource and draw card potential provided by Dragon's Hoard. I'm always pleased to see an opening hand with Dragon's Hoard. It smooths out our mana, and gives us a reliable option when we need additional gas in the late game. We often don't need the gas mid-game, because we are so heavy in game ending threats.

The Sideboard is Yours...

I feel like the cards we have included in the sideboard here reflect a personal preference for me - J.B.. There may be better options, and there likely are better options, in making this deck effectively answer the meta. Having stated that the sideboard is not one hundred percent tuned, I would welcome you to make a contribution to this list and leave your comments below. Let's go through my extra 15 cards: 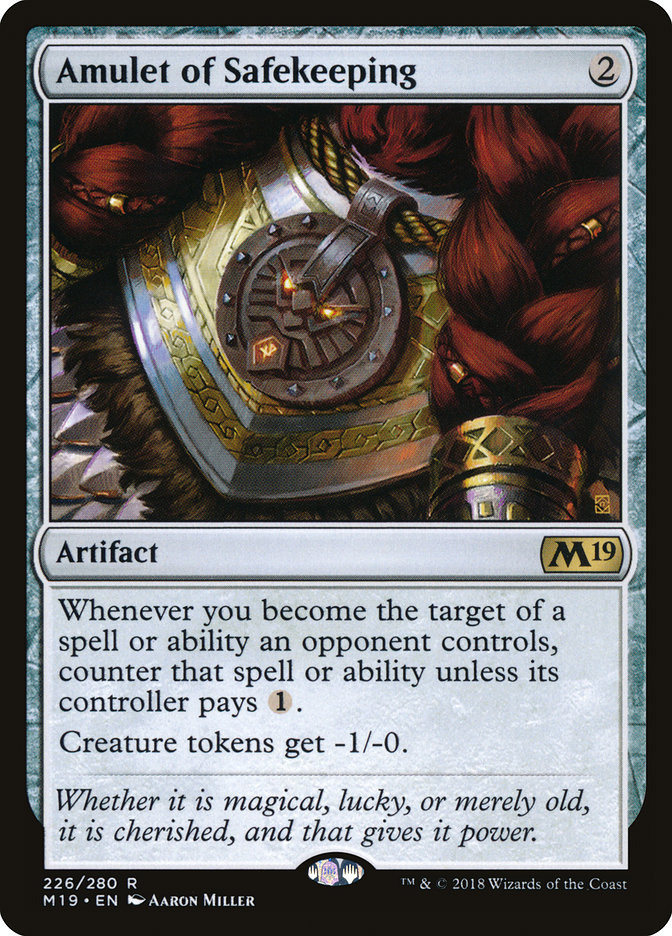 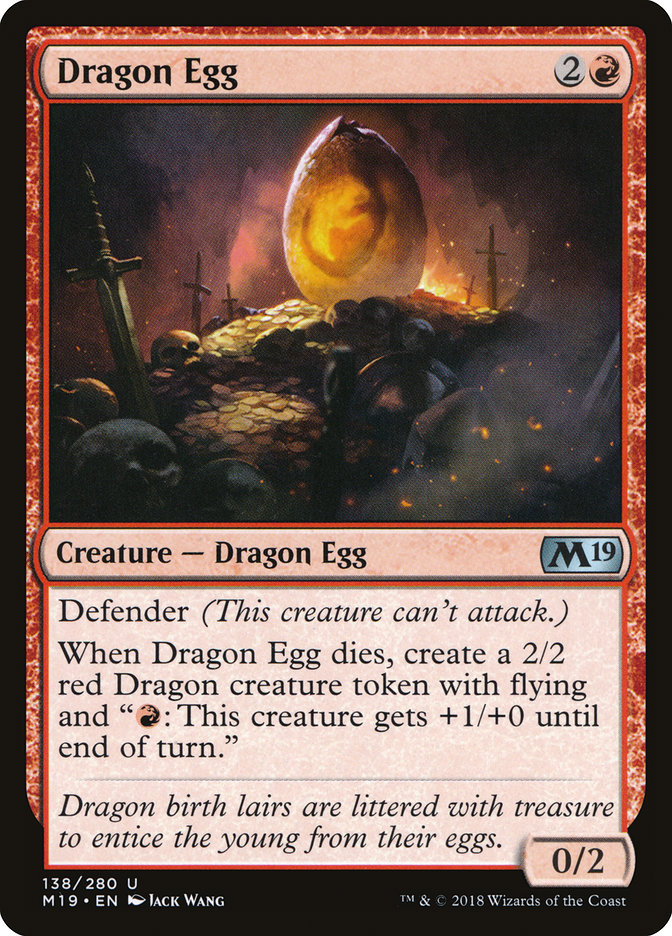 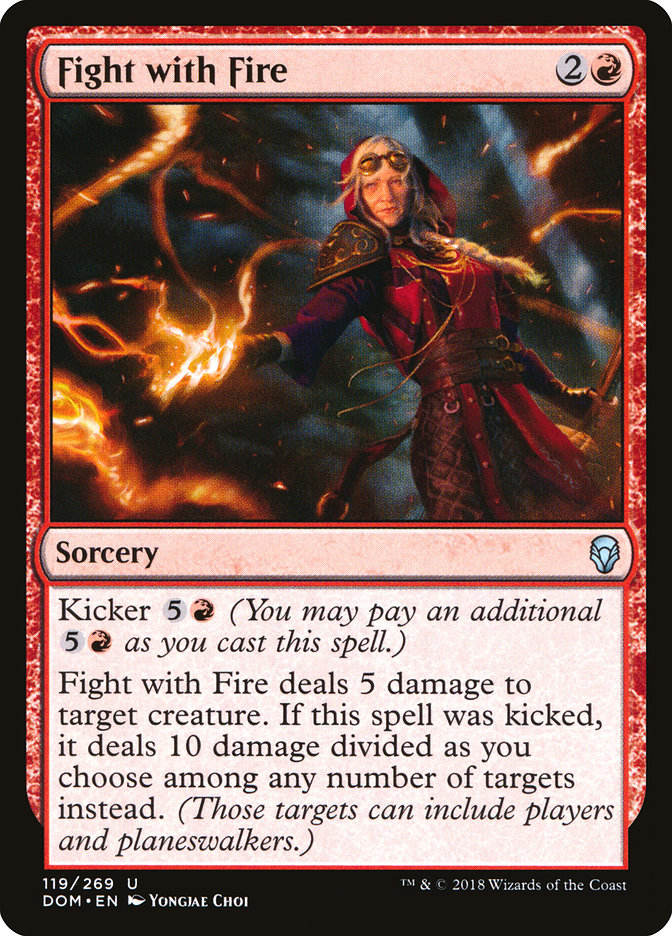 The meta is really beginning to spit out some very token heavy decks, and we are also seeing a good amount of control in the form of Thought Erasure and Disinformation Campaign. Amulet of Safekeeping is a great wrench in the cogs for those strategies. It slows down hand destruction plans, and when stacked we see a great deal in the way of damage prevention applied against token strategies running Saprolings, Soldiers and Knight tokens. Dragon Egg is a an solid answer to aggro. Frankly, it's not all that often that your opponent will withhold attacks based upon it's presence on the board, but that's exactly what we want. We board in the eggs when we want to go a little more aggro ourselves. We decided to include a single copy of Fight with Fire for that one off whammy. I could do better with this choice, but have won games off of 10 damage to the face late game when our opponent is burning resources to mitigate the big air attacks.

Negate is an obvious include in most Standard decks with Access to blue mana. Sometimees wee just want to be able to kindly say, "thank you, but no thank you." Deafening Clarion with board wiper and lifelink for our Dragons is a devastating game ending spell. Not only are we removing any potential chumpy flyers, but we are also create a life total swing that effectively locks the result of the game in our favor.

Bring us your creations. Take this deck for a spin. Leave you feedback in the comment section. Join LandSayGo.com and follow us on socials. Until next time, play a Steam Vents tapped on turn one, and say go.