While I personally enjoy playing cards that make the Johnny in my heart have a braingeyser, I seem to build relatively decent aggro decks. Aggro is one of those funny deck archetypes that always seems to get a bad rap, as newbie players tend to gravitate toward it and the more enfranchised players tend to write it off for more of a control deck. However, while it is true that aggro on its face seems simplistic (just turn your cards sideways), it actually offers a fun, fast-paced strategy that requires high level decision making to find the right lines for victory. And with rotation right around the corner and the major support of Boros in Guilds of Ravnica, this is the perfect time for aggro to see a resurgence before control has the chance to find its footing.

There are a few different variants that Boros can go at the moment. With cards like Path of Mettle, running a hastey, vigilant, double-striking deck could be truly amazing. When Path of Mettle, flips, it really is an amazing ride. However, walk with me here, I’m going to propose a different strategy all together.

I believe Boros has a fantastic opportunity to run an unbelievably powerful token strategy that can be fast and aggressive early, but come up huge in the mid to late game.

Let's take a look at the tactics in this deck and why I think it can be quite formidable. Really, the deck centers around Divine Visitation. A new mythic from Guilds of Ravnica, its a 5 drop do-nothing that turns any token you create into a 4/4 flying, vigilant angel. It's amazing. So how do we make it work for us? Basically we want to make tokens without really trying.

In order to make Divine Visitation worth it, we need to be able to get value from it the turn it comes down. We have a few different ways of doing this in the deck. Cards like Haazda Marshal, Legion Warboss, Karn, Scion of Urza, Leonin Warleader and an Ajani emblem can all create tokens for us right away. Ajani, also has the added benefit of reanimating a Goblin Instigator to get a 1/1 Goblin and his flying feathery friend.

If they aren't able to take care of Divine Visitation, you should be able to get some amazing value off of it the next turn. Casting a Legion's Landing on turn 6 (possibly even turn 5 if you flip an early one) feels great. We all also know the power of History of Benalia, and getting 4/4 flyers out of the deal is even better than the 2/2s. Even activating an Adanto or a Memorial to Glory feels very powerful. But really, there is one card that I'm sure many people will have overlooked for this deck: Tillinoli's Summoner. If you are able to untap with both Divine Visitation and Summoner, you have the potential for one of the most brutal alpha strikes in standard. Getting X 4/4 flyers on attack is back breaking. This card will likely be overlooked, and if it is punish your opponents for it.

The deck uses a few methods of card advantage. The most powerful is Karn, Scion of Urza. This walker is everything we would want in this deck. It creates tokens, filters for cards, and is super easy to cast. Karn is a workhorse. We also utilize Arch of Orazca to generate late game advantage when we are in top deck mode. Getting to ascend will be fairly easy to do, and this can definitely help us see an extra card each turn. Lastly, I'd like to introduce to you a card that I think is currently undervalued: Risk Factor.

This card is one of the best punisher cards ever made. Yes, it gives your opponents a choice. But in this deck, either mode is a success for you. Your opponents should be at a low life total from all of your attacking, so getting to draw 6 (minus 1) feels great. But if they elect to take the first 4 damage, they probably won't want to take the second. At instant speed, this card is a fantastic inclusion to the deck.

The removal package feels pretty great. In addition to Seal Away, we showcase 2 new cards from Guilds here. Citywide Bust and Response//Resurgence. 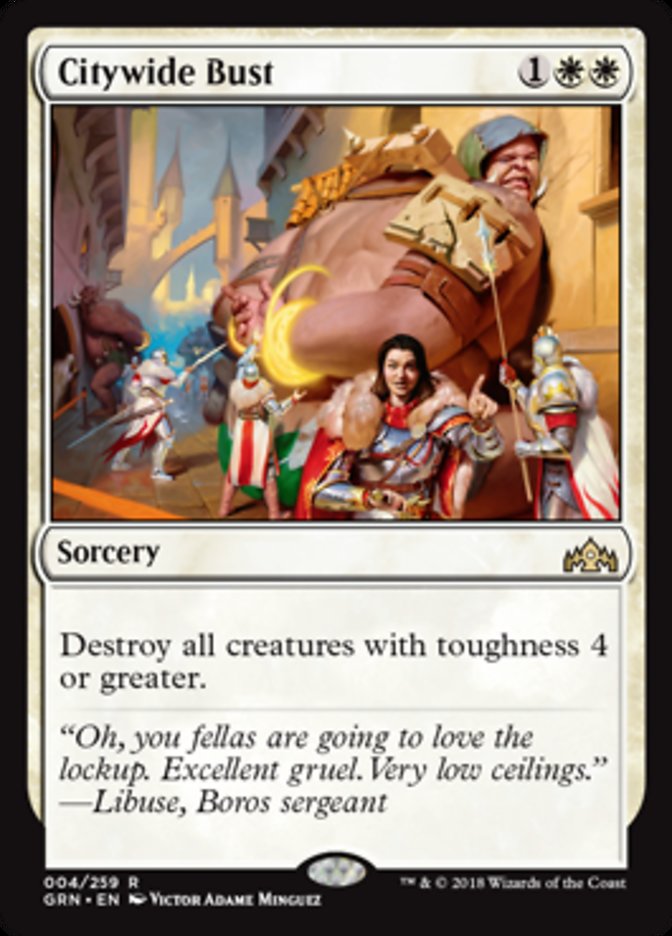 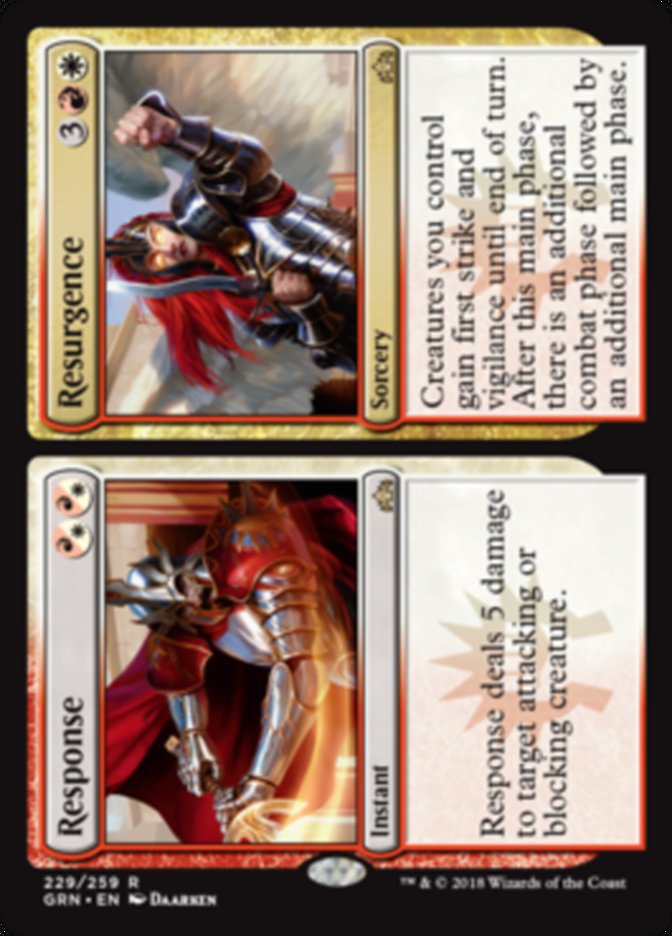 Citywide Bust is really the best fit for a sweeper in this deck. Sure, it'll kill our token angels, but that isn't when we cast it. We cast this when our opponent is starting to stabilize against us. Response is a great way to handle the dragons or other angels in the format like Lyra or Shalai. Also, don't discount Resurgence. This sorcery can be be a game winner if planned accordingly. However, we really are only playing this for Response; its a powerful, flexible removal spell.

"This is great," I can hear you say, "but what about Goblin Chainwhirler? How do we combat that?" Really, that is the reason why Charge is in the deck. For 1 white mana, we can defensively anthem our entire team to a Chainwhirler's enter the battlefield ability. We also have the added bonus of alpha striking our opponent on an all out swing.

For added support against Goblin Chainwhirler, we also run a pair of Tajic, Legion's Edge. The enter the battlefield effect is completely negated when he is out. Not to mention he permabuffs a smaller creature and is a hastey threat with a built in combat trick. Tajic is also great in the burn matchup or the matchups with damage based removal.

Speaking of Chainwhirler, we actually run a pair ourselves against the several token variants that will come from this new standard. We also run a pair of Settle the Wreckage to deal with fast aggro lists and the larger creatures we can't seem to deal with, like Vine Mare. Ixalan's binding is a must against those problematic planeswalkers or utility nonland permanents. And because I assume our nonland permanents will get enchanted away, a couple of Invoke the Devine will help us see that we get those back; doesn't hurt that it gains us 4 life. Sentinel Totem is there for all the graveyard decks that will be out there and Banefire is to get there against control.

I was honestly back and forth between Citywide Bust, Deafening Clarion, and Slaughter the Strong. I ultimately thought that Citywide Bust would be the best way to hit a one sided board wipe but the other wraths may be a decent thing to try out. Justice Strike could be an okay replacement for Response as it theoretically can take down larger creatures, but it is pretty matchup dependent in my opinion. I like the options that the split card brings to the table. You may also want to try the new 3 mana extra turn spell that gives your creatures indestructible (Chance for Glory), it could be a good way to get that last bit of damage in, but I personally don't think the risk is worth it for this deck. If you are on a budget, Sarkhan could be an okay replacement for Karn; he still loots and can provide tokens on ultimate. I would still prioritize Karn if you have him or am will to shell out the money for him. But I would play either/or, not a mix of the two.

However, the card I think that has the best chance in finding a slot is our old friend Huatli, Warrior Poet from Ixalan. She can gain us life, produces free 3/3 tokens with trample, that still have room to grow, and she can take out at least 3 blockers for a final alpha strike. I think Huatli has a lot going for her, but the reason she isn't in the deck is to try to keep the curve of the deck relatively low. Running 2 different five drops along with all of the 4 drops, I think it just pushes her out of playable.

Play this deck fast and aggressive, but don't be afraid to keep cards in hand and utilize your various mana syncs. When you get down your Legion Warboss, don't forget that you don't have to attack with him if you have your Divine Visitation (but the token gains haste, and must attack). I think this deck has a lot of playability and will be a great deck for the start of Guilds of Ravnica standard.