A week ago, I teased a pairing of cards that just feels so right. This Orzhov pair is of course, Elenda, the Dusk Rose and Teysa Karlov. That said, I've built around their interactions with one another with both new and old cards, and I can't wait to show you what I've come up with.

This deck is fairly creature dense, and being an "aristocrats" style of deck, it is important that we have fodder that we can sacrifice. It is important to note, that this deck does not have a totally free sacrifice outlet, one that we could use and abuse like Nantuko Husk or similar. Instead, we have a carefully crafted mess of creatures that works well together and provides us with value when we sacrifice our creatures.

Let's start out with the main 2 bombs in this deck: Teysa Karlov and Elend, the Dusk Rose. Teysa Karlov is a 2WB 2/4 that has the ability that whenever a creature we controls dies, if it would trigger an ability, copy that triggered ability. It also has gives all of your tokens vigilance and lifelink! Elenda, the Dusk Rose is a 1/1 Vampire with lifelink for 2WB with the ability to put a +1/+1 counter on her whenever a creature dies, and then when Elenda herself dies, you create X 1/1 Vampire tokens with lifelink, where X is Elenda's power. So, the obvious synergy between these two is that for every one creature that dies, assuming Teysa Karlov is in play, Elenda would get two +1/+1 counters and then when Elenda dies, you'd get twice as many tokens; this was a match that was made for each other. 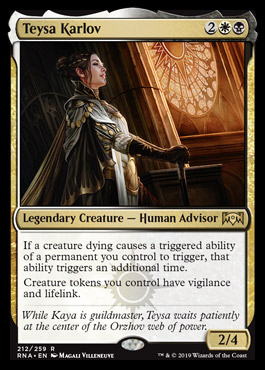 So, with this in mind, the rest of our creatures should want to kill creatures or provide value whenever it or another creature dies. 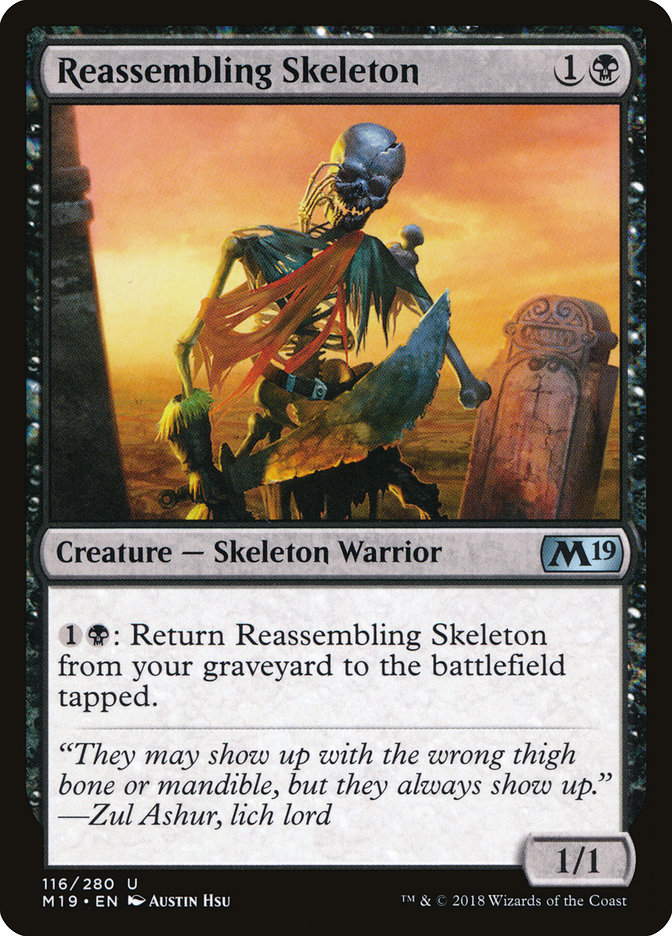 We are running a play set of Hunted Witness in the deck. A 1/1 for one white, it has the added ability of when it dies, you create a 1/1 soldier with lifelink. Already, this creature is a great pairing with both Elenda and Teysa. Elenda will enjoy the ability to get two +1/+1 counters from this card and Teysa is going to enjoy giving you an additional token whenever Hunted Witness dies. A play set of Reassembling Skeleton is in the deck as well. While it is only a 1/1 for 1B, I love the added ability of paying 1B at anytime to return it from the graveyard to the battlefield tapped. I opted to run Reassembling Skeleton over the cheaper to cast, higher power Gutterbones. While Gutterbones is great, I'm just not sure this is the right deck for it. Unfortunately, Gutterbones can only return to your hand at sorcery speed by paying 1B, thus forcing you to recast it for a B. You can also only activate this only if an opponent lost life that turn. I'd much prefer Reassembling Skeleton's recursive ability to put the card directly onto the battlefield at any time for 1B. In fact, this interaction works superbly with sacrifice shenanigans, especially with our next card.

We are running 3 Priest of Forgotten Gods, a new card from Ravnica Allegiance that is a 2/2 for 1B with a tap ability. If you tap her and sacrifice 2 other creatures, you can force any number of players to lose 2 life and sacrifice a creature. You then get two black mana and draw a card. So, with that 2 black mana, you can continually recur at least 1 of your skeletons each turn, giving you the opportunity to activate another Priest that turn or by giving you an option of removing a creature on your opponent's end step, and getting back your skeleton all before you untap. Truely, a powerful synergy.

The Priest of Forgotten Gods is just 1 of our card advantage engines. We are also running a play set of Midnight Reaper. While Midnight Reaper does not work off of creature tokens, it will have the opportunity to draw us a plethora of cards, especially if we are continually sacrificing our creatures. In fact, if we have a Midnight Reaper in play when we activate a Priest of Forgotten Gods, sacrificing 2 Reassembling Skeletons, our opponents would be forced to sacrifice a creature, we'd draw 3 cards, and reanimate at least 1 of our skeletons all before turn's end. Wow!

For additional sacrifice support, we are also running a full play set of Tithe Taker. This 2/1 for 1W with Afterlife 1, an ability that gives us a 1/1 flying spirit whenever Tithe Taker dies. It also has the added ability of forcing our opponents to pay 1 mana every time they want to cast a spell or activate abilities on our turn. This card is a great main deck burden towards the counter control lists, allowing us to really force them to play off curve or commit resources on their turn. I think this card is going to be a standout in the deck.

Creature removal is still a key aspect to this deck, so that's why we are running 4 Plaguecrafter. Plaguecrafter is a 3/2 for 2B that has the ability of forcing each player to sacrifice a creature or planeswalker, and if they can't they have to discard a card. This card can be risky though, as the discard clause can hit us too if our opponent deals with our board when he enters the battlefield. Still, the card turns on our strategies and triggers the abilities on our other cards. It is also a great answer in drake or Niv-Mizzet decks, as those decks usually have only one creature out at a time.

We'll also be running a couple of Cast Down for early aggro and a Mortify to deal with Legends or troublesome enchantements.

We do have a few other spells that can give us tremendous value whenever a creature dies. This first of which is a very powerful 5 drop, Open the Graves. This enchantment states that if a nontoken creature you control would die, create a 2/2 black zombie. This ability obviously tags really nicely with Teysa, as you'd get two 2/2s while also giving them vigilnance and lifelink. Powerful stuff.

I'm also running a fun janky card in this deck, which would probably be one of the first to get cut for sideboard cards, but is absolutely hilarious in the right match ups. Dead Man's Chest is a creature aura that for 1B gives us the ability to enchant our opponent's creature giving us the ability to exile the top X (equal to the creature's power) cards of that player's library and you can cast them at anytime you normally could, using mana of any color. What's hilarious is that when paired with Teysa, you'd be able to exile a tremendous amount of cards. In fact, it would be double the creature's power. That is some hilarious stuff. This card is perfect in that drake matchup, as it provides us with a ton of card selection as we force our opponent's to sacrifice their drakes.

As far as the land base is concerned, we are running a full playset of Godless Shrine and a full playset of Isolated Chapel. We are running 4 tap lands that create more value for us. 2 Memorial to Glory provides us with mid game tokens after a Teysa comes down, giving us surprise lifelinking blockers. We also included 2 Memorial to Folly, giving us the ability to recur a key creature from our graveyard in the mid to late game. We then follow it up with 2 Field of Ruins to deal with pesky nonbasic lands, 3 Plains, and 6 Swamps.

For our Sideboard, I'm running 2 Ajani's Last Stand. Not only does this card give us the ability to get free value in that Grixis discard match up, but we also can bring it in to give us the opportunity to play it with Teysa, giving us 2 4/4 angels with vigilance (and now lifelink) whenever a creature we control dies. Against control and combo we are running a pair of Arguel's Bloodfast for early game card draw and late game additional sacrifice outlet. 3 Duress finds its way into the sideboard as an answer to all of the control decks that will be popping up, turbo fog, or even super friends decks or hardcore removal. We are running 2 Ixalan's Bindings to help deal with problematic permanents, forcing our opponents to forgo cast another. I did opt to run 2 Kaya's Wrath over Cleansing Nova. I think a deck that can leave behind masses of tokens on a wrath is going to want an all encompassing 4 mana wrath. A close second to consider is Slaughter the Strong, as it would leave some on your board and force your opponent to sacrrifice a majority of theirs. For graveyard hate, I am running a pair of Kaya, Orzhov Userper. Being able to exile a phoenix or so while also gaining you back some life seems like an amazing play for this deck. We are also running an additional Mortify, just in case. Lastly, we are running a single copy of the Immortal Sun, giving us great answers to planeswalkers and real power to us. It is also nice that it combos really well with Dead Man's Chest, allowing us to cast our opponent's spells more cheeply.

I think we have the start of something really fun. I'm sure we'll need to wait until the last set to really see a true aristocrats style deck, but all in all, I think this turned out pretty decent. There is a lot of great synergy in this deck and a lot of great combo potential. We may need to adjust our deck here an there to find the right ratios of cards, but I can't wait to see Elenda, the Dusk Rose really shine.